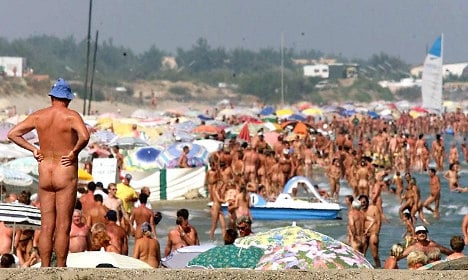 French Economy Minister Emmanuel Macron and his wife Brigitte. Photo: AFP
Macron had teamed up with Paris Match magazine to release an exclusive look at his life, all while he enjoyed a getaway to Biarritz on France's west coast.
The minister told the magazine that he needed the beach escape to “read, write, and think”.
He also used the holiday to spend some time on the beach, and Paris Match was quick to include several holiday snaps of Macron and his wife.
However, one picture showed a little more than readers perhaps had bargained for.

In the photograph, featured over a two-page spread, Macron can be seen apparently looking in the direction of a passing nudist, a man who appears to be middle-aged.
“In politics, you have to observe the French… even those who are a bit more laid back,” Paris Match captioned the picture. While it's unclear exactly what is happening, it appears as if Macron and the nudist were sharing a word or two as they passed by. Macron's wife, Brigitte Trogneux, is also looking in the direction of the nudist.
The unusual picture didn't escape the attention of French social media users, the tweeter above calling it the “WTF photo of the day”.

The photo shoot comes as France prepares to go into a general election in April next year, with some tipping Macron to be making a run for the country's top post.
Macron has repeatedly denied that he has been making moves on the presidency, most recently after reports in the French press said he was raising funds for a presidential election war chest.
“These two assertions are totally false,” the 38-year-old rising star told reporters in May.
Paris Match reported at the time that Macron raised nearly 10 million pounds (€12.75 million, $14.5 million) during a trip to London to “fund a campaign if he decides to run”.
Macron made waves in April by setting up his own political movement, “En Marche” (On the Move), prompting cabinet colleagues to call on him to get into line.
The Minister has repeatedly been rebuked by members of his own government after suggesting that several sacrosanct Socialist principles like the 35-hour week get abolished.
READ ALSO: 'Hoax' or cunning plan: Macron for French president?