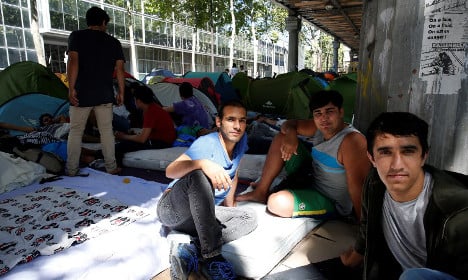 Refugees in Paris. Photo: AFP
France's Housing Minister Emmanuelle Cosse has urged members of the French public to consider taking in a refugee, as asylum shelters cannot cope with the sheer numbers of individuals.
The minister has said that the government would be offering incentives to the charities that could help set up housing situations between refugees and the public.
To house 1,000 extra people, the government is willing to shell out €1,500 per refugee per year to any charity with the capacity to help find housing for 50 refugees or more.
The scheme would only apply to those who already have refugee status, the minister added.
Of course, this means that the public will have to be ready to open their doors to help out, with Cosse calling for “citizen engagement”.
Those looking to host must be able to provide a private room and must be able to commit for at least five months, she said.
Cosse, pictured below, also announced plans to create an additional 3,000 bed spaces in reception centres “before the end of September”, more than doubling the current figure of 2,000.
The extra beds will be provided at around 50 centres across France, Cosse told Le Monde newspaper. Photo: AFP
France is already facing tough challenges with the influx of refugees, the number of whom is set to swell by 30,000 up until 2017 in accordance with EU quotas.
Charities wishing to take part in Cosse's plan must apply by September 20th in time for an October launch.
The French public has already proved willing hosts when it comes to taking in refugees, with charities like Singa already operating to help refugees find homes among the French.
One Parisian woman, who spoke to The Local on condition of anonymity, said that housing a refugee for five months in her Paris flat was “a genuinely positive experience”.
“I now have a friend from a background I would never have come across in my day to day life,” she said, adding the trio would often share meals and discussions.
“It gave me a chance to personalise a faceless issue that confronts us almost daily. I have an intimate understanding of the reasons he left, the risks he took to get to Europe and the determination he has to fit in and stay.” Paris police work to move on scores of refugees in northern Paris. Photo: AFP
However, it wasn't always smooth sailing, she added.
“Language was probably the biggest barrier. Even though he had French lessons three days per week, communication was not always easy. Sometimes it required extra concentration which could be difficult after a long day at work,” she said.
The woman advised people looking to do the same to commit to a time frame and then extend it if need be.
“Don't be tempted to promise too much too soon. It's better to invite them to stay longer than ask them to leave,” she said.
She also suggested reading up on the refugee's home country in advance and setting some basic house rules for everyone.
“On the whole I wouldn't say the experience changed my life forever but it certainly enriched it. I'd do it again in a heartbeat,” she told The Local.