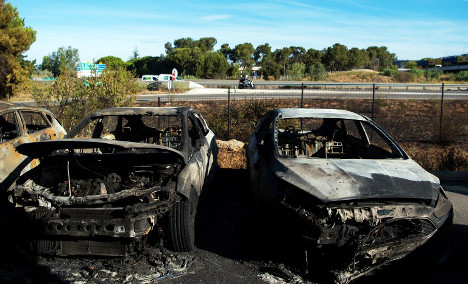 Burnt out cars in Vitrolles, north of Marseille. Photo: AFP
Air tankers were seen taking off from the firefighters' base in nearby Aix-en-Provence heading towards Marseille, France's second city, as fires continued to smoulder in the area.
At the port of Fos-sur-Mer, northwest of Marseille, 800 hectares (2,000 acres) went up in flames on Wednesday, local official Jean Rampon told AFP.
“Violent winds are exposing the area to the risk of new fires,” Rampon said, adding that the dry vegetation was a “matter of concern”.
The fires took hold Wednesday afternoon and spread over 3,300 hectares of scrubland and wooded areas.
IN PICTURES: Wildfires ravage 3,300 hectares in southern France Some 1,800 firefighters including many drafted in from elsewhere in France joined the battle backed by around 500 rescue vehicles, five air tankers and two helicopters and around 100 police, Rampon said.
“Three people suffered burns including one who is seriously injured,” he said, adding that around 20 firefighters and a dozen police officers were suffering from smoke inhalation.
Around 500 people forced to leave their homes spent the night in shelters in the area, including 300 from the city of Vitrolles, some 30 kilometres (20 miles) north of Marseille, which lost 1,600 hectares to the blazes.
Fires damaged many houses and several industrial buildings in Vitrolles, Rampon said.
Transport by road and air was badly affected by the fire on Wednesday evening, with two motorways closed and some flights cancelled at Marseille airport.
Forest fires in the Portuguese holiday island of Madeira meanwhile claimed three lives and forced around 1,000 people to flee their homes. The fires are mostly to the north of Marseille, but also broke out in Herault (point 5 above) to the west. Photo: GoogleMaps