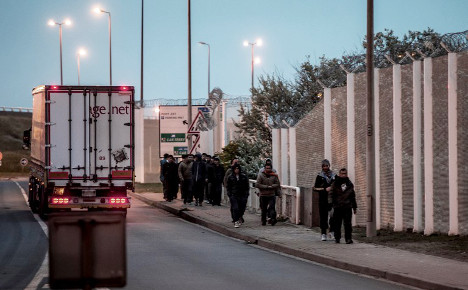 Britain is spending some €2.7 million on a concrete wall along the main approach road to the ferry port of Calais in a bid to prevent migrants and refugees from trying to jump aboard trucks bound for the UK.

Work was supposed to start on the wall on Monday, according to reports in the French press, after a rise in migrant incursions onto the road where they have used rocks, shopping trolleys and tree trunks to stop trucks before clambering aboard.

But the Home Office in the UK has said it will not commence until September.

The wall will be four metres high and will stretch for a kilometre along the main dual carriage way leading to the port, known in French as the Rocade.

It will be built in addition to the current barbed wire fencing that has proved fairly ineffective in blocking migrants cramped in the squalid Jungle camp from accessing the road.

Some aid groups however say the wall, which will be watched closely by CCTV cameras, will do little to prevent or dissuade those desperate to reach the UK from taking their chance.

Yolaine Bernard, vice president of the Salam aid organisation which helps migrants told The Local it was a complete waste of British tax payers money.

“It's not going to change a thing. These people will still try and scale the wall and it will just result in more of them being injured,” she told The Local.

“There's no easy solution to this issue, but it's a shame to spend all that money on something that won't work.”

The aid agency says measures like extra fencing and the flooding of lowlands around the port only add to the risk and lead to extra deaths among migrants.

Bernard said tensions were high in the so-called Jungle camp this summer due to the fact that an estimated 6,000 migrants are squeezed in.

After French authorities cleared the southern part of the camp earlier this year there is simply less space to accommodate more people.

Britain has already splashed out several million to build a huge fence around the Channel Tunnel port and the rail tracks leading up to it, but even lorry drivers say the new concrete wall will do little.

Richard Burnett, chief executive of the Road Haulage Association has already called it a waste of money and believes the wall will shift the problem further down the road.

Migrants have also been jumping aboard trucks in motorway rest areas on the motorway leading to Calais.

Burnett says lorry drivers are now being advised not to stop withing 150 km of Calais.

“It is imperative that the money to pay for a wall would be much better spent on increasing security along the approach roads,”  he said.

Migrants themselves also say they won't be deterred.

“I have to go to the UK. How will I get there? We will try anything, even by boat,” a 30-year-old Sudanese refugee called Erfan told France-Bleu radio.