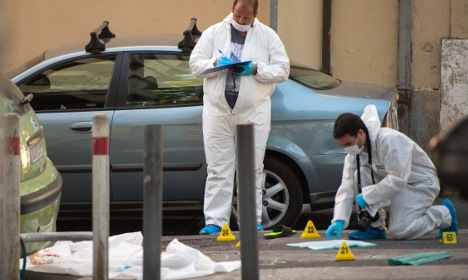 The two fatalities were young men in their 20s who have yet to be identified. Photo: AFP

The two men were travelling in separate cars through central Marseille mid-morning when their way was blocked by a third vehicle, deputy prosecutor Andre Ribes said.

Four men armed with Kalashnikovs got out of the vehicle and opened fire, killing one man as he tried to run off and the other at the wheel of his car, Ribes said.

The two fatalities were young men in their 20s who have yet to be identified.

“Given the operational method, the likelihood is that this is a settling of scores” between criminal groups, said Ribes. “Terrorism is being ruled out.”

France’s third largest city, the Mediterranean port has a long-running reputation for violence linked to the drugs trade.

Eighteen people have been shot dead in the Bouches-du-Rhone region, which includes Marseille, since the start of the year, according to police. The toll was 13 during the same period in 2015.

The previous gang-linked killing this year was on June 25, when two men were shot dead, also by Kalashnikov, on a housing estate in northern Marseille. A 14-year-girl who was a bystander was seriously wounded.