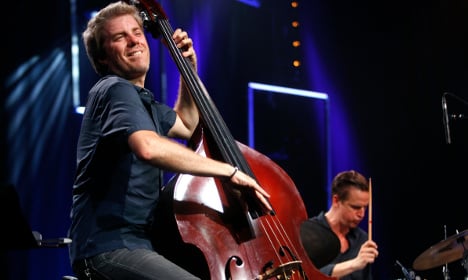 "We have a lot of things in common but politics is definitely not one of them," Kyle said. Photo: AFP

“It can be a big shadow some times,” Kyle Eastwood said on Friday after soaking in the applause of thousands of concertgoers at the Jazz in Marciac festival, one of France's top jazz events.

“Obviously, it gives attention, good or bad. Obviously, some people get a pre-conceived idea of who you are or what you're doing before they actually get a chance to figure out for themselves.

Yet he admits that the family name goes before him.

“Changing your name? It crossed my mind a long time ago when I was about to go to film university. But then I figure people would find out anyway. I would be Kyle Smith and people would know anyway,” says Kyle, who has contributed music to several of his father's movies, including “Letters from Iwo Jima”.

On Friday, he introduced in French the composition named after his father's famous World War II film.

Carving a niche in the music world has ensured that he has been able to make a name for himself in his own right “for quite a bit now.”

Sometimes, Eastwood junior feels the need to demarcate where he and his 86-year-old four-time Oscar winner father are different, not least in their political views.

Eastwood senior has come out in favour of Donald Trump as his preferred choice for the US presidency, decrying what he sees as a politically correct “pussy generation” while accepting the Republican nominee has said “dumb things” during a bitter campaign.

“We have a lot of things in common but politics is definitely not one of them,” noted Kyle.

“I'm certainly not a Trump supporter and politics is one of my least subjects. My sister and I are definitely pretty opposite than my father.

“I'm not a huge Clinton fan either but I would certainly pick her over Donald Trump. (Bernie) Sanders is interesting but I don't know how realistic he is,” Kyle said.

Father and son may have differing political views — but music has always forged a bond.

“There was a lot of music around the house, predominantly jazz. Both my parents are big jazz fans,” says Kyle, who credits both Clint and mother Maggie Johnson with nurturing his passion for it.

“Both my parents play a bit, music has always been important,” he said.

He says he started off with piano, then learned “a bit of guitar” before “bass chose me.”

Kyle's exposure to the film industry included an uncredited role notably in his father's 1980 flick “Bronco Billy” but it was music which called far louder.

“I studied movies but music was always what I liked the most,” he said.

Writing soundtracks for the likes of “Letters from Iwo Jima”, “Invictus” and “Million Dollar Baby” has enabled Kyle to straddle both media.

“Hopefully, we get a chance to work sometimes again,” Kyle said of potential future link-ups with his father, while he has already collaborated with sister Alison, notably on “Battle Creek,” which she produced last year.

Kyle's appearance at Marciac is his third and he says France is always a much-loved venue, seeing Paris as his European base while listing electronic band Daft Punk as a favourite band.