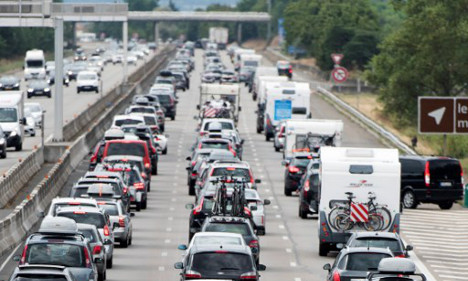 Photo: AFP
France's traffic info service Bison Futé has forecast an “exceptionally difficult day on the vast majority of roads” for Saturday.
The agency categorised the day as level “black” nationwide for those heading on holidays.
But the traffic jams are due to build up on Friday afternoon as another batch of holidaymakers head for the sun, or indeed return from it back to city life.
It warned motorists to avoid major roads until 9pm on Friday, from 8am to 8pm on Saturday, and from 9am to 3pm on Sunday.
The reason the roads will be so busy is that many of those who holiday in July – known as “juillettistes” in French – will cross paths on the way home with the “aoûtiens”, or those who head off in August.
On top of this, thousands of foreign tourists are also set to descend on France, from Britain, Holland and other parts of Europe to spend their summer holidays on French beaches or in the countryside. The agency noted that areas around the Mediterranean, particularly near the Spanish and Italian borders, will be particularly trying for motorists heading in both directions.
Bison Futé has warned that anyone planning to leave Paris on Saturday can expect traffic jams from as early as 5am and lasting until the afternoon.
Those returning home on Saturday in the Mediterranean area have also been slapped with a “black” warning.
Sunday should be almost back to normal on the roads, the agency forecast, only issuing orange alerts for the Riviera.
Last Saturday was ranked as the busiest day of the summer on French roads, with almost 700 kilometres of traffic jams reported. This Saturday's traffic is not expected to be as severe.
Some of the worst roads over the weekend. Photo: Bison Futé