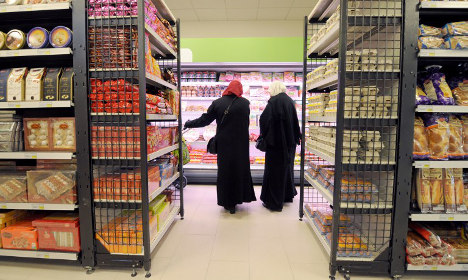 Photo: AFP
What exactly does a “general store” need to sell in order to provide for its community?
This is the question that has caused a local housing authority and a franchise-running shopkeeper to come to loggerheads in Colombes, in the suburbs of north western Paris.
The Good Price shop – an “alimentation générale” – has been accused of not catering to the community because it sells no pork or alcohol.
While it may sound like no big deal for some, local residents have complained that they have to travel much further just to grab a bottle of vin rouge to go with dinner.
The head of the housing authority that owns the shop, Olivier Virolle, has filed an appeal to terminate the lease because he says the current shopkeeper isn't respecting the conditions of the contract, namely that the store act as a “general supermarket”.
“It's a communalist supermarket not just because of what's not there, but also what is there, namely prayer mats and 95 percent of the meat being Halal,” Virolle told Le Parisien newspaper. Photo: Google Maps
The paper noted that the shop had an “oriental ambiance”, complete with some items decorated with Arabic writing.
Virolle added that the local mayor had paid a visit and asked the shop to install a small alcohol and deli counter “to meet the needs of the aging community”, who he said can't necessarily make the trip to the next closest shop, which according to Google maps is about a kilometre away.
The man running the Good Price supermarket, Soulemane Yalcin, told the paper that his choices were nothing but “business”.
“I look around me and I target what I see. The lease states 'general food store and related activities' – but it all depends on how you interpret 'related activities',” he told the paper. Photo: Google Street View
He added that he chose not to sell alcohol because of the security issues that come with it, and sold no pork because “there are a lot of losses in the deli department”.
The shopkeeper has hired a lawyer and the case is set to hit courts in October.
The news comes just months after another Muslim shop in France, this time in Bordeaux, fell foul of the law and was fined €500 in April after it offered “sexist” opening hours, inviting “Sisters on Saturdays and Sundays only.”
And Friday's news marks the second time in two days that members of France's Muslim community have been accused “communalist” activity, after a Muslim organization privatised an indoor swimming pool in southern France for a “burqini” pool party.
The local mayor is moving to cancel the event, claiming that it was likely to cause public disorder.