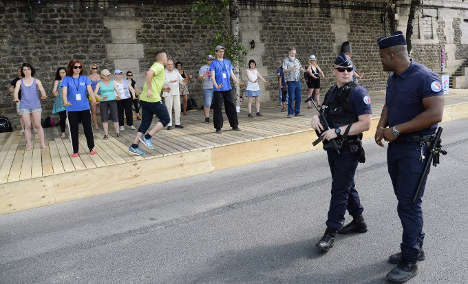 According to Le Point news site authorities called the emergency meeting on Wednesday night because they had got wind of a specific threat to stage an attack on Paris Plage beach festival that is taking place in the city.

Le Point did not reveal any details of the threat but said all the major actors involved in the fight against terrorism were present at Wednesday's meeting.

At the meeting it was decided that the usual river police boat would be boosted by presence of specialist SWAT teams from the BRI brigade, who are called on when a terror attack or siege is underway. It is not clear whether Wednesday's meeting was directly linked to an alert that was put out on Tuesday regarding an Afghan asylum seeker, suspected of intending to launch an attack.

There are no further details about the suspect and it is not believed police have launched an active manhunt. He has not been named and no photo has been released to the media.

The Paris Plages festival which sees parts of the River Seine and the canal at the Bassin de la Villette in the 19th arrondissement turned into a beach is being held amid unprecedented security measures.

All roads leading to the beach areas are either blocked by police vans or concrete blocks to prevent a Nice-style truck attack.

Everyone heading into the event is searched and soldiers have been deployed to patrol along the river and canal banks.

The number of police on patrol either on bike or on foot has been noticeably increased from previous years.

France has boosted security at the summer events across the country by drafting in 23,000 extra officers and soldiers however many smaller events and shows have been cancelled because of the terror threat.