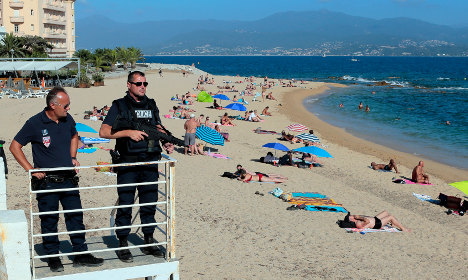 With every new terror attack, French citizens stoically declare that “life goes on”, but despite this show of defiance, a creeping anxiety has taken hold of society.

Outwardly, the French summer is in full swing, restaurant and bar terraces — targeted in a November attack on Paris — are packed and vibrant, beaches are covered with sunseekers and streets as busy as ever.

However beneath the surface, many are feeling the strain after a string of terror attacks over the past 18 months.

“There is a cumulative effect. At first (a terror attack) is an unexpected event, but now we are in a situation where we fear it happening again,” said Evelyne Josse, a Belgium-based psychologist and trauma expert.

Users of a popular French online medical forum describe panic attacks on the metro, being paralysed with fear at the prospect of taking trains to go on holiday or going to the beach, with one woman writing she feels that going out in a crowd is like playing Russian Roulette.

“The anxiety is always there,” 32-year-old Thibaut Chaize told AFP on his way to work in Paris.

“We are afraid but we can't stop living,” he said. “The wariness is always there. Any strange behaviour on the metro or at a concert, all that provokes a bit of fear.”

'It can happen anywhere'

The cluster of terror strikes began in January 2015, when 17 people were killed in a spree of violence in Paris, including at the Charlie Hebdo satirical magazine and a Jewish store.

Then in November, when 130 people were killed at restaurants, bars and a concert hall in Paris, the reality of an ever-present danger began to set in, with government talking of “war” and citizens growing used to the sight of soldiers on the streets.

In between, a foiled attack on a high-speed train in France and the Brussels metro and airport bombings only added to the list of places that could be targeted.

In July, when a jihadist drove a massive truck into a crowd in the Riviera city of Nice, crushing 84 to death, and a priest was murdered in a church in Normandy, it became clear that terror went beyond big cities.

“I phoned my son during the Paris attacks. Now it is he who called me, 'Dad are you ok?' You never know, it can happen anywhere,” said Eric Lecornu, 57, from Saint-Etienne-du-Rouvray where the priest was killed last week.

For every traumatised citizen, there are those full of bravado, such as a Muslim from the notoriously gritty city of Marseille whose expletive-laden video daring the Islamic State group to attack his hometown went viral.

But even the cheekiest are worn down by an ever-mounting security presence and constant metro delays due to “suspect packages”.

Summer, when the French decamp en masse on holiday, has been hit by the cancellation of several festivities, from stargazing to fireworks shows and a perfume festival.

But the government has taken pains to note that most events were going forward, some drawing bigger crowds than usual, while cancellations have concerned events where security could not be ensured.

Beloved Parisian summer activities such as an open-air cinema festival have been moved indoors, while police on horseback are a common sight and a “beach” set up along the Seine River is patrolled by gun-wielding soldiers.

On beaches in Saint-Malo in Brittany, lifeguards have been equipped with guns.

“This is new to us. There are countries like Israel where there is a daily threat of a terror attack. One hears talk of the 'Israelisation' of our society but even in Israel you cannot prevent people from carrying out certain acts,” said the psychologist Josse.

She said society cannot live in a permanent state of stress, and that like in Israel — which faces the constant threat of attack from Palestinian militants — people will merely learn to adapt to the threat.

“That means that most of the time we will live normally, and certain situations will trigger anxiety.”

Josse estimates that around 20 to 30 percent of people will choose to avoid anxiety-producing situations such as crowds and public transport.

“In reality the risk is minimal. One has more chance of dying in a car accident on our way to a concert or football match than in a terror attack.

“You can avoid these places, and it is sure you won't die in a terrorist attack. But you might die of boredom.”

The psychologist is most concerned about a societal breakdown as a result of Muslims being seen as a threat.

“It is natural to identify danger, and dangerous situations, and then avoid it. So the risk is that we reject anyone or anything that makes us think about Islamism.”

“Already to me, terrorism has won because the societal fracture already exists and I am afraid it is going to get worse,” she said.

Kheira, a 46-year-old Algerian living in Paris, told AFP that as a Muslim, she faces a double threat.

“We are afraid (of terror attacks) and above all we suffer prejudice. I would like them to change this name 'Islamic State', because for those who don't know Islam, it means Muslims, and it isn't true.”