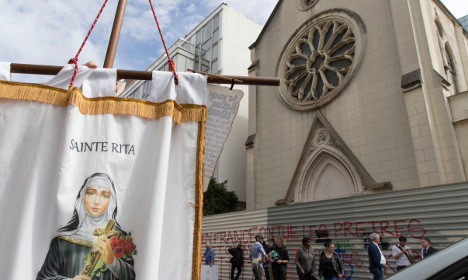 A Paris church known for its annual tradition of blessing people's pets was the scene of high drama on Wednesday as police forcibly removed its priest and 30 followers ready for the building's demolition.

The group had barricaded themselves inside Saint Rita's church in a last-ditch effort to ward off the wrecking ball after a marathon tug-of-war with the owners.

Police said the evacuation was completed without incident, but politicians of the Republicans political party said they had witnessed rough treatment of the group.

“Several were even dragged along the ground,” they said in a statement.

Republican deputy secretary general Eric Ciotti accused France's Socialist government of being “without a soul and without bearings” for allowing the eviction to go ahead.

Her aunt was more pointed in her criticism, saying that France should be destroying mosques run by radicals not churches.

Saint Rita, built in 1900, had been the sanctuary of Gallicans, traditionalist Catholics who profess to practise the faith as it existed in medieval times, celebrating mass in Latin, but they are not recognised by the Vatican.

The church's owner, the Association of Catholic and Apostolic Chapels, had decided to replace the structure with a housing development, and it was shut in April 2015.

But Abbot Guillaume de Tanouarn, who used to bless cats, dogs, birds and even camels on the first Sunday in November according to the Gallican rite, led resistance to the demolition.

After the evacuation, around 20 activists remained outside the church, while the entrance was patrolled by private security guards and workmen were boarding up the windows.

The association obtained a building permit in March 2012, and the demolition was to have begun in October 2015, but the bulldozers were called off because a group of squatters had occupied the church.

The congregation of Saint Rita — the patron saint of lost causes — failed to raise the three million euros ($3.3 million) it would have needed to buy the church back.

A court finally ruled on January 6 that the association could expel the occupants.

Government spokesman Stephane Le Foll said Wednesday that the church was not part of France's historical heritage and stressed that the association had taken the decision to destroy it.

Rules and laws apply “to everyone in the same way,” he said.