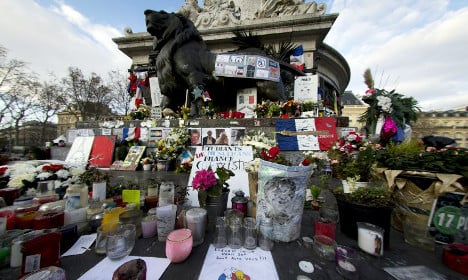 All photos: AFP
Before the Charlie Hebdo attacks in January last year, the statue of Marianne was just another big statue in another big square in Paris – the Place de la République.
However, in the days after the attack at Charlie Hebdo and a Jewish supermarket, and following a solidarity gathering at the square that saw hundreds of thousands attend, the statue has become a memorial. People leave flowers, candles, flags, photos, poems, drawings, teddy bears… and each fresh attack has brought more of the same.
But the bronze statue, which depicts France's symbol of liberty Marianne, is set for a makeover. “It's time we got rid of everything and made brought the statue back to normal,” Bruno Julliard, the mayor of the 10th arrondissement told France's Buzzfeed.
The statue itself will get cleaned, as will the pedestal and its numerous smaller statues. “It's a beautiful pedestal and it's hardly visible today, not to mention the fact that it's quite damaged.”
The City of Paris has commenced a cleaning project that will see all the flowers and candles thrown away during the job. Large metal gates have already been set up around the statue's pedestal on Monday as workers began the clean-up.

And it will be no mean feat, not least considering that many have used markers and paint to scrawl their messages on the enormous statue's pedestal. Indeed, city officials have said that the job will take until August 11th.
City archivists have selected some of the objects, documents, and photographs that they plan save and add to the city's archives, objects that may eventually be donated to museums.