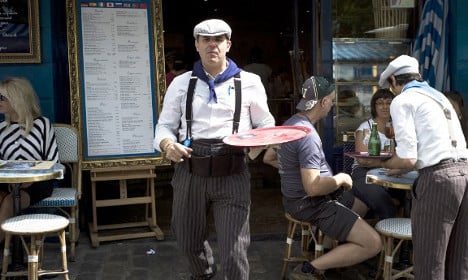 Is restaurant service better in the US than France? Photo: AFP

There's a lot to be said for the personal, hands-on service in American restaurants, argues Joshua Melvin, but first Ben McPartland says a trip to the United States left him craving the grumpy Parisian waiter.

McPartland explains why he now appreciates the curt service often served up in Paris:

Give me a grumpy Parisian waiter any day, or at least that’s my conclusion after a recent trip to the US.

The one thing to console yourself about when getting the brusque treatment from a waiter at a Paris bistro, who is too impatient to give you time to decide between a cheeseburger or just a burger or won’t help you translate “coq au vin”, is that at least you can be safe in the knowledge that he or she is genuinely in a bad mood.

It’s not a trick, he’s just had a bad day. In short you know where you stand.

You can’t say the same for the majority of waiters/waitresses in the US, who give you the impression you have made a new best friend for life, as soon as you walk in the establishment.

Most of our dining experiences over there started with an opening line from the waiter/waitress along the lines of “My names Joanna, and I am going to be taking care of you this evening.”

Look, give me informality over stuffiness any day, but do I really need to know your name? And if wanted taking care of I would have gone to the clinic or my big sister’s house.

The irony is their efforts “to take care of you” actually lead to some pretty poor service and I realize at this point that I might have gone a bit native in France.

Constant interruptions to check if “everything is OK guys,” or to fill glasses was irritating. Bringing main courses out while people are still eating their starters is a major faux pas. As was taking away plates just as the last forkful was entering your mouth, even though everyone else around the table is still eating.

This overfriendliness and interventionist approach is of course geared towards getting the fattest tip possible at the end of the meal, and given that the waiters and waitresses are probably earning a pittance you certainly can’t blame them for that.

The problem of course is not the staff themselves but whole the tipping system, which can be worth up to 20 percent in the US.

It’s not so much that it hits you in the pocket but the dirty taste it leaves in your mouth. Once that tip is paid, my new best friend Joanna, will probably never think of me again. That promising relationship we built up will go nowhere. (Apologies for the sarcasm)

In France when it comes to restaurants it’s basically the same attitude the French public has towards their country as a whole – “I pay my taxes so everything should be covered.” The cost of a meal, the table, the chairs, the cutlery and of course the service, however unfriendly it may be (and the truth is, if you stay away from the tourist spots, most waiters in Paris are amiable and professional)

Up until now my instinct in Paris has been to try to encourage friendly service by rewarding it with a tip. But I may have to think again. I realize now that’s a slippery slope towards the US-style system. I might have to keep my lose change in my pocket from now on before I end up hearing “Je m’appelle Jean-Pierre et je vais prendre soin de vous.”

Melvin says critics of American service are missing the point:

“Hi, I’m Kari and I’ll be your server tonight.”

Those words spoken from a smiling, perky young blond in an American chain restaurant might be enough to prompt a hardened Parisian to wish silently for a faster way home.

I get that. I’ve heard the arguments against American restaurant service: It’s fake and it’s annoying because the server is essentially putting on a show so that you will give her or him more money when it’s all over.

Once again the United States has monetized something and made people dance in horrible ways so they can pay their rent. Yes, and we’re born to die and life has no meaning and so on.

Or you could snap shut the tarnished antique box of Paris for a moment and consider things from my perspective.

First and foremost the gratuity that lands (or not) on the table at an American restaurant amounts to power for the diner. If the server was rude and stupid, slow and sloppy — in other words professionally incompetent — the customer can hold some money back.

In Paris you are paying full price for the waiter’s service whether it was superb and polite or so bad it nearly ends in a fistfight. In a country where rights and equality are valued, surely it’s better to have recourse.

Holding a tip back is kind of like going on strike. It's the last resort for an unsatisfied person who has tried and failed to coax what he needs from a person in a position of power.

And the idea that American service is fake is ridiculous. If humans interacted with one another only in ways that truly reflected their feelings the world would be a smoking pit, nuked flat by trigger happy purveyors of truth and honesty.

No, instead we smile at people we don’t like, we shake their hands, we may even laugh at their bad jokes. It is called politeness, the oil by which we slide past one another without violence. So the smiley, bright service in America is just that, a form of politeness.

As to the argument of being annoyed by the presence of a person who wants to take care of you, well I just can’t help there, but I will try to explain.

Living is hard, you have to struggle to get even a little bit of what you’d like to have. People may hurt you. It might rain all day today and then be really cold tomorrow.

But here Kari wants to bring you more napkins or refill your water glass or get you a little bit more barbecue sauce because you eat the stuff like it’s an essential ingredient to your blood.

I’m fine with that. In fact I’m happy to reward Kari at the end of the meal for her attention, her hard work and the exhausting effort of being nice to everyone, even though not everyone is nice. Don’t forget she has to make even the hard case Parisian smile, which I’m sure is tough.

Let us know where you stand on this issue. Americans in France, we're particularly keen to hear from you.