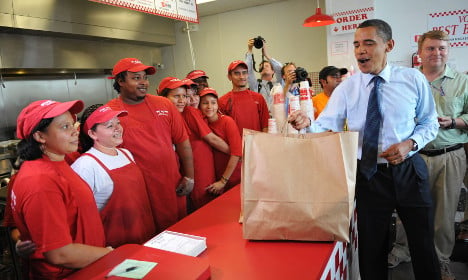 In a city obsessed by burgers it’s perhaps surprising that the chain, which Barack Obama believes makes “the best burgers in the world”, did not come to Paris earlier.

But on Monday US chain Five Guys joined the likes of McDonald's and Burger King in setting down roots in the French capital.

Five Guys opened its first restaurant at Cour-Saint-Emilion, Bercy Village in the 12th arrondissement while another outlet is planned for the Champs-Elysées by the end of this year and a third at Gare du Nord next year.

If it all goes well and the French show they have an appetite for their burgers then Five Guys will open around 40 restaurants across the country.

And the signs are good.

The French currently scoff around 1.1 billion burgers each year. To put that in perspective, that’s almost the same number of jambon-buerre baguettes that are swallowed each year (1.28 million).

A sign of the how dominant the burger has become in France came in a 2014 survey that revealed that burgers now had a home on the menu of “seventy-five percent of traditional French restaurants.”

“Burger-mania is far from being over in France,” read the survey by Gira Conseil.

If the arrival of Five Guys is anything like when Burger King made its long-awaited return to Paris, then burger lovers can expect long queues at the new store.

Although the chain is competing with McDonald’s and Burger King it will attract a different kind of clientele, or at least the type of clientele who are prepared to spend a bit more on their burgers.

A visit to Five Guys for a meal – burger fries and drink – will set you back around €13, a fair bit more than at McDo.

But it’s not just the Big Mac and the Whopper that will be watching how the new guys on the block get on.

Paris is saturated by other popular burger joints including Blend, Paris-New-York, Big Fernand, French Burgers and the likes of Le Camion qui Fume.

The chain says it justifies its higher prices by the quality of its products and separates itself from other chains by the fact the burgers are personalized and made in front of the customer.

The chain guarantees some 250,000 different choices.