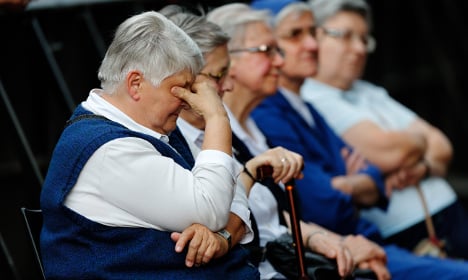 Three nuns were in the church when Father Jacques Hamel was killed. Photo: AFP

The two nuns who were in the church when Father Jacques Hamel was killed, his throat slit on the altar, said the men appeared aggressive and nervous during the attack at the Eglise Saint-Etienne in Normandy on July 26th.

Then, one of the attackers seemed pleased.

“I got a smile from the second (man). Not a smile of triumph, but a soft smile, that of someone who is happy,” nun Sister Huguette Peron told Catholic newspaper La Vie on Friday.

Abdel Malik Petitjean and Adel Kermiche, both 19, had pledged allegiance to the Islamic State group and both were killed by police in the shock attack.

The men stormed the 17th-century stone church during mass in the town of Saint-Etienne-du-Rouvray, taking several hostages before killing the priest and seriously wounding another captive.

One nun fled the scene and alerted the police, leaving Sister Huguette and Sister Helene Decaux, both in their 80s, in the church with the jihadists.

At one point, Sister Helene got tired and asked to sit down.

Then the men started talking about religion, asking the nun if she was familiar with the Koran.

“Yes, I respect it like I respect the Bible, I've read several suras. And those that hit me in particular are the suras about peace,” Sister Helene responded.

One of the attackers replied: “Peace, it's what we want… as long as there are bombs on Syria, we will continue our attacks. And they will happen every day. When you stop, we will stop.”

Neighbours and acquaintances said Kermiche was “obsessed” with going to Syria, where an international coalition including France is carrying out air strikes against the IS jihadist group.

“Are you afraid to die?” one of the attackers asked.

“I believe in God, and I know I will be happy” Sister Helene said, as she quietly prayed to herself.

Then they started talking about God.

“Jesus cannot be God and a man. It is you who are wrong,” one of the men said.

At that moment, she prepared for her own death, not knowing what was coming next.

“Thinking I was going to die, I offered my life to God” she added.