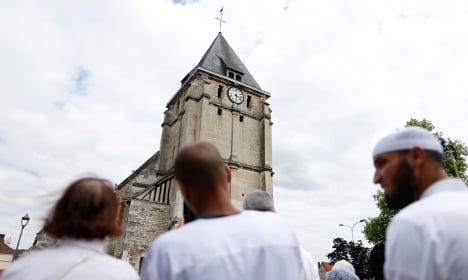 A regional Muslim council has planned a "brotherhood march" in Lyon, while a church in Bordeaux said it would hold a non-denomination vigil for the 85-year-old priest. Photo: AFP

Father Jacques Hamel had his throat slit on the altar by ISIS-inspired attackers who stormed his church in a Normandy town during mass Tuesday.

A regional Muslim council has planned a “brotherhood march” in Lyon, while a church in Bordeaux said it would hold a non-denomination vigil for the 85-year-old priest.

Prayers were also planned at the Eglise Saint-Etienne where the killing took place, the latest in a nation shaken by three major extremist attacks in the last 18 months.

French authorities Friday filed the first charges tied to the attack against a 19-year-old man accused of “criminal conspiracy with terrorists” over a mobile phone video that police discovered at his home, a judicial source said.

Three days before the church attack authorities discovered the video that showed one of the assailants, Abdel Malik Petitjean, pledging allegiance to ISIS and speaking of “a violent action.” Petitjean and his accomplice Adel Kermiche, both 19, were both killed by police in the attack.

Three other people are also being held by authorities for questioning.

The charges came as Prime Minister Manuel Valls said he would weigh a temporary ban on foreign financing of mosques, urging a “new model” for relations with Islam after a spate of jihadist attacks.

In an interview with Le Monde newspaper, Valls said he was “open to the idea that – for a period yet to be determined – there should be no financing from abroad for the construction of mosques.”

The Socialist prime minister also called for imams to be “trained in France, not elsewhere.”

And Salafism – an ultra-conservative brand of Sunni Islam – “has no place in France,” Valls said.

France has just over 2,000 mosques, for one of Europe's largest Muslim populations which numbers around five million.

Some large mosques have been financed by Saudi Arabia and other Gulf or northern African countries, according to local media reports.

After meeting with President Francois Hollande earlier this week, the rector of the Paris Mosque Dalil Boubakeur himself suggested “certain reforms of the institutions” of Islam.

In northern Saint-Etienne-du-Rouvray where Hamel was killed, Muslims and Christians gathered in mourning after the attack that hit their town.

“You share our pain. This pain is also yours,” Father Auguste Moanda said, in a rare speech given during Friday prayers at the local mosque.

Both Valls and Cazeneuve have faced calls to resign after the second jihadist attack in less than a fortnight raised questions over France's vigilance and preparedness.

The government has come under fire since it emerged that both church attackers had been on the radar of intelligence services and had tried to go to Syria.

On Friday, L'Express magazine revealed that Kermiche had described the modus operandi of the attack on the encrypted messaging app Telegram.

“You take a knife, you go into a church. Bam!” says a chilling message recorded just a few days before the attack. A source close to the investigation confirmed the authenticity of the message, according to L'Express.

Other messages speak of the influence of a “sheikh” Kermiche met in prison, his wish to set up a terrorist cell and details of his failed attempts to reach Syria.

Some 200 people were in the Telegram group receiving the messages, L'Express said.

The church attack came as the government was already facing a firestorm of criticism over alleged security failings after the Bastille Day truck massacre in Nice that left 84 people dead two weeks ago.

The Nice attack was the third mass killing in France since the January 2015 jihadist assault on the satirical magazine Charlie Hebdo that left 12 dead.

In all, 230 people have been killed and several hundred wounded, a toll never before seen in peace time in France's modern history.