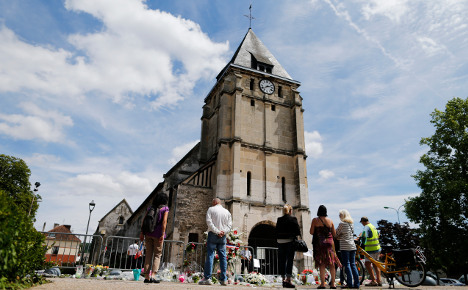 Photo: AFP
The French Council for the Muslim Religion (CFCM) has urged the country's Muslims to take part in a church mass this Sunday to show solidarity with the country's Christian community and to honour the priest slain by jihadists this week.
Following what the CFCM dubbed the “cowardly assassination” of Father Jacques Hamel on Tuesday, the group has called for unity between France's Muslim and Christian communities.
The CFCM called on all mosques in France to hold talks during prayer on Friday about “the pivotal role that Islam plays in respecting other religions”, it said in a statement.
The group said it was calling on all heads of mosques, Imams, and the faithful to visit any nearby churches, particularly for Sunday Mass.
The move is “to show our Christian brothers the solidarity and compassion of France's Muslims in the wake of this new tragedy that has struck our country through an attack on a place of worship”.
The attack, which was carried out during Mass on Tuesday, saw two young radicalized Islamists taking a small congregation hostage at a church in northern France's Saint-Etienne-du-Rouvray, before killing the priest by slitting his throat.
Both attackers were shot dead by police, and have since been identified
The murder, called a “vile terror attack” by President Francois Hollande, came just two weeks after 84 people were killed in Nice when another radicalized Islamist ploughed a truck into a crowd of Bastille Day revellers. (AFP)
France's Muslim leaders have been quick to condemn the brutal killing.
The CFCM itself called it a “terrifying and horrifying act”, and was were backed by the Muslim group CRCM (Conseil régional du culte musulmam), which announced that it would hold a minute of silence for the victims on Thursday.
Meanwhile, the imam of the mosque in the northern French town where a church was attacked Tuesday said he was “stunned” by the murder of the local priest, who he described as a friend.
“I don't understand, all of our prayers go to his family and the Catholic community,” said Mohammed Karabila.