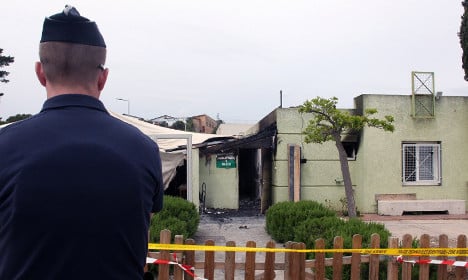 A French police officer stands in front of a Muslim prayer room after it was destroyed by a fire, suspected to be arson, in Ajaccio.. Photo: AFP

Since the brutal murder of a French priest by two homegrown French jihadists, talk of the prospect of a kind of civil war in France has increased.

Hervé Morin, the president of the Normandy regional council, talked of a “risk of the fracturing of French society.”

“We have lived in peace since 1945 but that is changing,” said Morin. “We need to respond to this accumulation of violence, if not French society will explode.”

His words echoed recent statements to a parliamentary inquiry by the head of France's internal security agency Patrick Calvar who talked of a risk of civil war in France if right wing extremists start launching revenge attacks against the Muslim community.

This week there was a sign that perhaps Calvar wasn't far off the mark when a group of Corsican militants who have been involved in armed struggle warned “Islamic radicals” they would respond in the case of an attack.

Numerous right wing authors have also evoked the prospect of France's communities turning on each other along ethnic lines as the result of cracks opening up with each terror attack.

For its part the government and religious leaders are repeatedly stressing the need for unity, but even that suggests ministers are increasingly worried that one-off terror attacks could lead to sustained civil conflict.

After each terror attack, Muslim groups have noted a rise in Islamophobic incidents but these usually consist of verbal abuse as we saw in Nice or racist graffiti scrawled on mosques.

There has been no major act of violence or storming of a mosque although there were worrying anti-Arab riots in Corsica in over Christmas which saw copies of the Koran burned. The trouble followed an ambush of firefighters in an immigrant quarter rather than any terror attack, but were a clear sign of community tensions. But are France’s communities really on the verge of turning against each other?

Simon Reich a visiting researcher at Institute of Strategic Research and at the Ecole Militaire (IRSEM) in Paris, believes “all this talk of civil war is just rhetoric.”

When the head of France’s internal security force Patrick Calvar told a parliamentary committee that he believed France was “one or two attacks” away from a civil war between extremist groups, Reich believes his words, as well as those of ministers who have talked of war, were probably motivated by a desire to gain support for extending the state of emergency and for justification for military raids in the Middle East.

While France has numerous issues that are all crisscrossing, Reich, a professor from Rutgers University in the US, believes the country’s population and its democratic institutions are resolute enough.

“France still has consensus among political parties for universal values that doesn’t include turning to violence,” Reich told The Local.

“It still has resolute democratic institutions and is a capable military power and powerful security forces, whether police or gendarmes who are trained to deal with the first signs of insurrection,” he added.

“This is not a failed state where we don’t have the capacity to stop these things from happening,” said Reich.

And then there’s the majority of the public at large who up until now have mourned the victims of terror rather than sought revenge.

“The people of France are saying we will not be scared, there is a certain amount of resolve and defiance to say let’s continue to live as usual,” Reich said.

“Are all those National Front supporters going to take to the streets with arms? No.

“France has universal values that people strongly subscribe to.”

Reich however warned that it all this doesn’t preclude the possibility that “some right wing splinter group could do something crazy”.

While it may be resolute enough to stop a civil war breaking out, France still faces a number of issues it urgently needs to deal with, Reich said, not least high unemployment but also finding way to economically and politically integrate its immigrant communities so they can feel they have a stake in French society they want to be a part of.

“The fundamental problem is that the French want an integrationist model but are not implementing the kind of policies that would extend opportunities to North African communities,” he said.

If France can achieve that then there would be perhaps far less fear and rhetoric around the prospect of civil war.