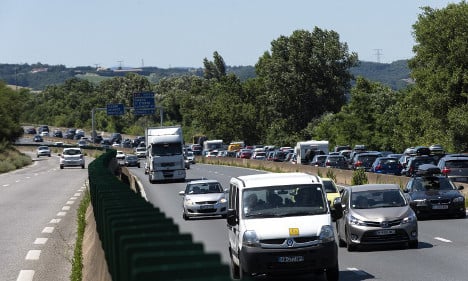 Photo: AFP
France's traffic info service Bison Futé has forecast an “exceptionally difficult” day on the roads for Saturday.
With jams and tailbacks expected all over, Saturday has been categorised as level “black” by road authorities.
The service listed an almost page-long set of highways and motorways to avoid, see it here, mostly consisting of any road near any large city.
Some roads out of Paris, including the A10, A6, and A7 are expected to be busy from 4am on Saturday.
Holidaymakers in France have been advised to set off on Sunday instead, rather than Friday night or anytime on Saturday, otherwise they risk being stuck in jams. The expected heavy traffic is due to the fact Saturday is right in the middle of the holiday season with thousands set to exodus towns and cities while others return from les vacances.
Thousands of foreign tourists are also set to descend on France, from Britain, Holland and other parts of Europe to spend their summer holidays on French beaches or in the countryside.
Sunday will be slightly better on the roads, the agency forecast, while still issuing an orange alert.
Friday, meanwhile, has been categorized as level 'Red' meaning jams are likely in certain places, notably on roads leaving big cities.
Motorists have been told to avoid roads leading into Bordeaux, Lyon, and Paris until 8pm on Friday night.
Some of the worst roads over the weekend. Photo: Bison Futé