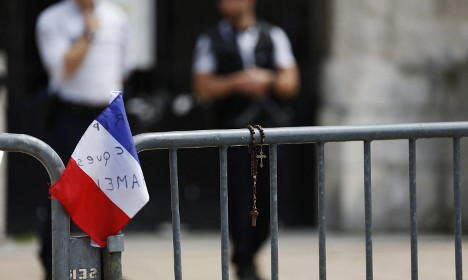 Photo: AFP
Unlike his accomplice Adel Kermiche, also 19, Petitjean never raised suspicions for radicalisation among his neighbours, and was unknown to police until last month when he tried to go to Syria.
His mother, Yamina Boukessoula, refused to believe her son was involved when she spoke to AFP just hours before the official confirmation.
“He was a good French citizen. He is gentle. I know my child, I know my son. He was not involved at all,” she said.
She added that he had left their home on Monday to visit his cousin in the northeastern city of Nancy.
His last text message to her came on Tuesday morning, just before the attack: “Don't worry, everything is fine… I love you.”
On Wednesday afternoon his mother, still refusing to believe her son was involved, sent him a final message: “Malik, it's mum, I don't know where you are. I have bad news. Call me. The police have come, they are talking rubbish. I hope nothing has happened to you my son. I love you. I miss you so much.”
The exchange marks just one example of the disbelief when it comes to the man's friends and family.
One friend, 17-year-old Hakim, said: “It is hard to believe. He was against Daesh. He was not radical at all.”
Petitjean was born to a family of Algerian origin and lived in the quiet lakeside town of Aix-les-Bains in the shadow of the Alps, popular with visitors seeking thermal cures.
The resort is 700 kilometres (430 miles) from the industrial Normandy town of Saint-Etienne-du-Rouvray where Petitjean and Kermich stormed a church and took hostages on Tuesday.
He and Kermiche, also a Frenchman born to an Algerian family, slit the 86-year-old priest's throat at the altar. Another elderly worshipper was severely injured but several other hostages escaped unharmed.
Both assailants were shot dead by police.
'What was inside his head?'
Djamel Tazghat, who manages the local mosque in the Aix-les-Bains suburb where Petitjean lived in social housing, said he recognised the young man in a video published by the Islamic State group in which the two pledged allegiance to the jihadist movement.
“I liked him a lot. We never had a problem with him at the mosque. No strange observations, he was always smiling… It's incredible,” he said.
“All the believers are shocked because he was known for his kindness, his calm. We never had any sign of radicalisation. What was going on inside his head?”
Petitjean — whose identity card was found at Kermiche's house — had never been convicted of a crime in France so his DNA and fingerprints were not available to speed up the identification process.
Sources say that after being gunned down by police, the second attacker's face was too disfigured to allow him to be clearly identified, and that his DNA had to be matched to that of his mother.
He came onto the radar of French police in June after he tried to travel to Syria from Turkey, and was placed on France's “Fiche S” of people posing a potential threat to national security.
Sources close to the investigation said Petitjean “strongly resembles” a man hunted by anti-terrorism police in the days before the attack over fears he was about to carry out an act of terror.
The sources said France's anti-terrorism police unit UCLAT sent out a note four days before the attack — saying it had received “reliable” information about a person “about to carry out an attack on national territory”.
Three members of Petitjean's family were taken in for questioning, said a source close to the investigation.
Unlike Kermiche and other jihadists carrying out recent attacks in Europe, there have been no indications that Petitjean suffered from psychological problems.