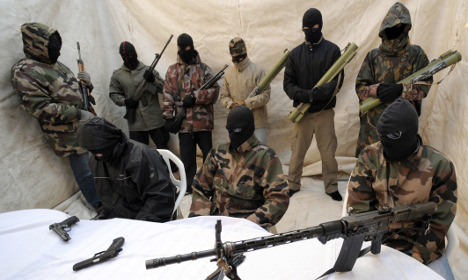 In a statement sent to Corsica’s newspaper Corse Matin the group FLNC October 22, a splinter group from the main separatist group the National Liberation Front of Corsica (FLNC), said any attack would trigger “a determined response without any qualms”.

The splinter group also warned the French government that “if a tragedy were to happen it would bare substantial share of responsibility because it knows who the radicals Islamists are in Corsica.”

“The aim of the Salafists is clearly to install Isis policies here and we are prepared for it,” the group said.

The militants, which have been involved in bombings and organised crime over the years, also stated that they had foiled a terrorist attack on the island back in June, that was planned to have been carried out in a public place.

The French government, which has revealed details of several foiled plots in the past, has never mentioned any thwarted plan to attack the Mediterranean Island.

The October 22 splinter group announced in May this year it would bring an end to its 40-year armed struggle, two years after the main FLNC group vowed to do the same.

The statement from the FLNC-October 22 comes as tensions between communities on the island have mounted in recent months.

In April this year a Muslim prayer hall was burned to the ground just months after the island was rocked by anti-Arab riots over Christmas.

Protests erupted on the Mediterranean island over Christmas after firefighters and police called to a low-income immigrant neighbourhood were ambushed and attacked.

Demonstrators shouting slogans such as “This is our home!” and “Arabs get out”, vandalised a prayer hall and set fire to books including copies of the Koran.

The attack on the prayer hall prompted French Interior Minister Bernard Cazeneuve to express his “solidarity with the Muslims of Corsica”.

While the FLNC-October 22 warned radicals that “your medieval philosophy does not frighten us”, the group also called on all “Muslims of Corsica” to take a stand and denounce radical Islam and report anyone who might be drifting towards radicalization.

“If Islamic State carries out actions on our soil, we can only win together.”

The group also urged “calm in the face of barbarity” and stressed that it’s group was not a refuge for those seeking a racial or xenophobic fight.

The warning from the militants comes after several politicians and even the chief of France’s internal security agency expressed concerns about the threat of a kind of civil war in France.

Patrick Calvar from the DGSI, told a parliamentary inquiry that there was evidence that right wing groups had been gathering arms to carry out their own attacks.

Calvar predicted “a confrontation between the extreme right and the Muslim world”.

“Where is the spark going to come from that will light the powder, transforming France into an uncontrollable country where groups take up arms and hand out their own justice?”