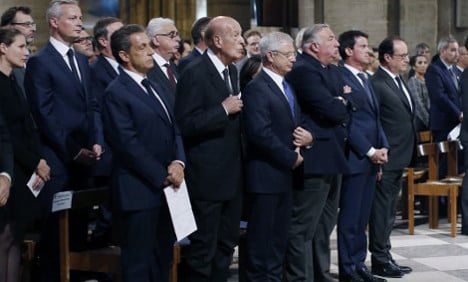 French investigators probing an attack on a Catholic church believe one of the assailants is a young man who
anti-terrorism police were desperately trying to track down, sources close to the investigation have said.

The young 19-year-old man was formally identified on Thursday as Abdel Malik Petitjean, from the Alps region of south east France. He was known to authorities for having tried  to travel to Syria.

Days before the church attack counter-terrorist police in France were warned he could be about to act.

Only one of the two men who stormed into a church in the northern town of Saint-Etienne-du-Rouvray during morning mass Tuesday and slit the 86-year-old priest's throat at the altar, has been officially identified.

However during a raid on the home of the attacker, 19-year-old Adel Kermiche, police found an identity card belonging Abdel Malik Petitjean.

“Several elements lead us to believe he is the second attacker,” said one of the sources close to the investigation, before hewas officially identified.

'Reliable information' person about to carry out attack

Abdel Malik Petitjean, who is from the Savoie region, has never been convicted of a crime in France so his DNA and fingerprints are not available to speed up the identification process.

But he was on police files since June 29 for having tried to enter Syria from Turkey, the source said.

DNA samples from his mother enabled investigators to identify him.

Sources say that after being gunned down by police, the Petitjean's face was too disfigured to allow him to be clearly identified.

However, the sources said that France's anti-terrorism police unit UCLAT sent out a note four days before the attack — saying it had received “reliable” information about a person “about to carry out an attack on national territory”.

The note came with a photograph which “strongly resembles” Petitjean, whose recent radicalisation towards jihadism had apparently been identified and the alarm raised.

But given there were no details of where or when the individual would act, France's security services were left facing a seemingly impossible race against time.

On Wednesday searches were carried out at homes belonging to Abdel Malik Petitjean's family and three members of his family were taken into custody, according to reports in France.

Kermiche was rapidly identified as he had been under house arrest, and was wearing a monitoring bracelet, after being arrested in Turkey for trying to reach Syria.

The video, posted on the Isis news agency Amaq, shows two young men with an Isis banner, as one of them recites in Arabic in a strong non-native accent a traditional pledge of allegiance to the group's head.

Isis claimed Tuesday's attack on a church in France during which an 86-year-old priest's throat was cut, saying it had been carried out by two of its “soldiers”.

According to Amaq, the two were “soldiers of the Islamic State who carried out the attack in response to calls to target countries of the Crusader coalition”.