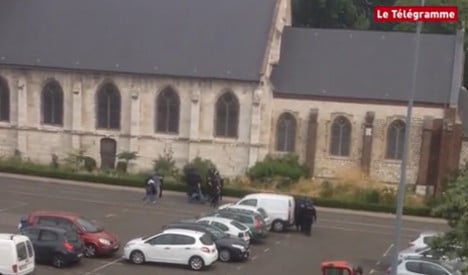 The video, published on the website of Le Télégramme newspaper shows the moment elite officers from the specialist BRI unit surrounded the church in the Rouen suburb of Saint-Etienne-de-Rouvray.

In the video, filmed the window of a flat by an “adolescent”, we can see the columns of officers move towards a door on the side of the church before moving away.

Then after shots ring out, the witness who took the video is heard saying: “There are shots, there’s army and everything.”

Moments later he says that “someone is shouting Allahu Akbar in the church”, and then “there are explosives!”

After listening to the shouting by the officers the witness says: “They’ve just said that there are two people dead. It’s crazy.”