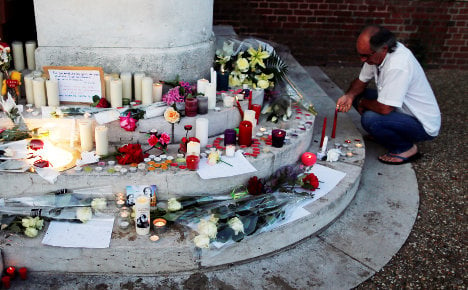 Adel Kermiche was one of two attackers who stormed the church in the northern town of Saint-Etienne-du-Rouvray during morning mass, slitting the throat of an 86-year-old priest and leaving a worshipper with serious injuries.

The attack, claimed by IS jihadists, comes less than two weeks after Tunisian Mohamed Lahouaiej Bouhlel ploughed a truck into a crowd in the Riviera city of Nice, killing 84 people and injuring over 300.

The third major strike on France in 18 months prompted a bitter political spat over alleged security failings, and revelations over the church attack were likely to raise further questions.

Paris prosecutor Francois Molins said Kermiche first came to the attention of anti-terror officials when a family member alerted he was missing in March 2015.

German officials arrested him and found he was using his brother's identity in a bid to travel to Syria.

He was released under judicial supervision, but in May fled to Turkey where he was again arrested and returned to France. He was then held in custody until March this year.

Kermiche was released and fitted with an electronic bracelet, which allowed him to leave his house on weekdays between 8:00 am and 12:30 pm, Molins said.

'He was a ticking time bomb'

Speaking to RMC radio Kermiche's uncle said the family had “given up a little” on keeping a close watch on him after he was released on remand with an electronic tag.

“Since he was released from prison he seemed to have got his wits back and turned away from his radicalized religious beliefs.

“He seemed to be more awake, less stubborn and narrow-minded. So we gave up a little bit on keeping a watch on him.

“Despite being on an electronic bracelet we thought he was going back to a normal life.”Tuesday's attack prompted renewed opposition calls to further harden France's anti-terrorism legislation.

But in the neighbourhood of Saint-Etienne-du-Rouvray Kermiche's extremist views well well-known.

One man who knew him told Le Parisien newspaper he was like a “ticking time-bomb” and that all he talked about “was his desire to go to Syria and kill Bashar al-Assad's soldiers.”

Others talked of how he knew little about Islam and could not cite anything from the Koran. “We wanted to slap him to get him out of this, but hwe thought he knows where we live and maybe he is in contact with Isis,” one acquaintance told the newspaper.

But Socialist President Francois Hollande — who faces a tough re-election bid next year — rejected them, saying: “Restricting our freedoms will not make the fight against terrorism more effective.”

Changes made to legislation in 2015, and the extension of a state of emergency in the wake of the Nice attack, already gave authorities sufficient “capacity to act,” he said.

But the deputy chief of France's police union, Frederic Lagache, said: “It should not be possible for someone awaiting trial on charges of having links to terrorism to be released” on house arrest.

'Where are the police?'

Mohammed Karabila, who heads the regional council of Muslim worship for Haute Normandie, where the church attack took place, asked simply: “How could a person wearing an electronic bracelet carry out an attack? Where are the police?”

One of the nuns managed to escape and call police, who tried to negotiate with the hostage-takers.

The nun, Sister Danielle, told local radio RMC that the men were speaking Arabic and shouting, and had “recorded” the attack.

Three hostages were lined up in front of the church door, meaning police could not launch an attack, said Molins.

Two nuns and one worshipper exited the church followed by the two attackers, one carrying a handgun, who charged at police shouting “Allahu akbar” (God is greatest). Police gunned down the jihadists.

“I thought it would only be in big cities, that it couldn't reach here,” she said.

A silent march on Thursday will set off from the town hall.

Outside Saint Etienne's Yahya Mosque — which sits on land donated by the adjacent Sainte Therese church — Karabila said his community had “never had problems with the authorities or the neighbours”.

He added: “Here we don't preach hatred or we would be shut down.”