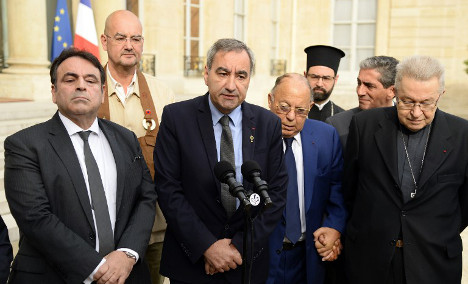 The president said that to “restrict freedoms and deviating from constitutional rules, would have no effect on the fight against terrorism” and would simply “weaken the cohesion of the nation”.

Hollande's challenge to head off divisions in the country in the face of the terror threat began on Wednesday morning when he welcomed leaders of France's main religions to the Elysée Palace.

All religious leaders called for more security at places of worship, but they were keen to stress their unity.

The Archbishop of Paris, Andre Vingt-Trois, praised the harmonious relations between France's religions.

“We must not let ourselves get pulled in to Daesh's political games,” he said, referring to Isis, saying it wanted “to set children of the same family against each other”.

The French president said that changes made to legislation already gave authorities sufficient “capacity to act”. He was speaking after two jihadists attacked a church in a Normandy town, killing an elderly Catholic priest by slitting his throat, and severely injuring another person.

Hollande's predecessor and opposition chief Nicolas Sarkozy earlier called for the government to “thoroughly change … the strategy of our counterattack.”

“Our enemy has no taboos, no limits, no morals, no borders,” he said, asking the government to adopt proposals made by his right-wing Republicans party.

The opposition wants anyone suspect of being radicalised to be placed in detention and to prevent convicted terrorists from being released from prison after having served time, if they are still considered dangerous.

The Republicans also wants to make it a criminal offence to have spent time in the “field of terrorist operations”, namely Syria and Iraq.

However those returning from jihad can already be charged with criminal conspiracy with a terrorist enterprise.

Since two gunmen walked into the offices of Charlie Hebdo magazine in January 2015 the French government has introduced a raft of legislation aimed at battling terrorism for a new sweeping spying law to giving police the power to carry arms off duty.

READ ALSO: What has France actually done to tackle terrorism Following the Nice truck attack the government bowed to pressure from the opposition and increased the state of emergency for a further six months and this time added some new powers to make it easier to search and keep tabs on suspects.

“The government is using all human and material means to fight this threat, with a mobilisation of police, gendarmes and soldiers never before seen in the Fifth Republic,” said Hollande.

The president has urged unity in a country poisoned by bitter political blame-trading over security failings after a Tunisian national mowed down a crowd celebrating Bastille Day on July 14, killing 84.

“What the terrorists want is to divide us, separate us, to tear us apart. We must avoid one-upmanship, arguments, conflation, suspicions,” he said.

“This war will be long. Our democracy is the target, and it will be our shield. Let us stand together. We will win this war.”

His refusal to bow to pressure to tighten laws was echoed by his Prime Minister Manuel Valls.

“After each terror attack, we cannot just invent a new law,” said Valls who warned about the danger of descending into a “war of religions”.

“Terrorists want to set the French against each other and to attack a religion in order to provoke a war of religions,” the PM said.

Politicians and even the head of France's internal security services have spoken recently of a kind of civil war in France.

The government is fearful that the more the attacks keep happening the greater the chance is of different French communities turning on each other.

“We must do everything to unite the French,” one advisor told Le Figaro newspaper. “What are the right and extreme right hoping to achieve? Do they want to give Isis what they want by dividing us and putting our democracy and the rule of law into question?”