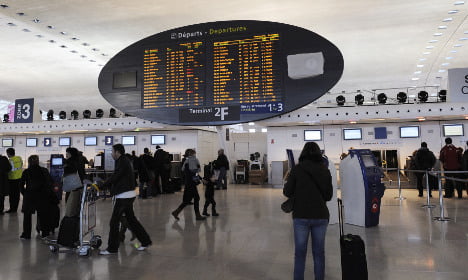 Air France said Tuesday a week-long strike from Wednesday by flight crews will see the carrier scrap 30 percent of
domestic and medium-haul flights at the height of the busy holiday period.

Some 35 percent of flight attendants, who account for 13,600 of Air France's 50,000-strong workforce, are expected to join a stoppage which the airline said would affect some 10 percent of long-haul flights.

Air France's partner airlines HOP!, KLM and Delta, are not affected by the strike.

Most flights have been cancelled in advance bu the airline warned: “There may be last-minute cancellations and delays. Difficulties with crew compositions may also limit the number of passengers per flight.”

The impact of the strike on flights on Thursday and the days to come will not be known until Air France has some idea of how many staff will join the walk-out.

“Our flight schedule will be adapted accordingly and published the day before your departure,” the airline said.

Unions representing around half of the strikers last Friday said they stoppage would go ahead as marathon talks failed to bring a breakthrough on renewing a collective labour accord on rules, pay and promotions which expires in October.

Management want to limit the extension of the agreement to 17 months, whereas unions want between three and five years.

Flights to destinations in Europe, North Africa and Israel will be affected, as well as some routes in Asia and Africa, the company said Monday.

In late June the CEO of the Air France-KLM group, Jean-Marc Janaillac, warded off a pilots' strike that would have been the second such stoppage during the Euro football tournament.

The pilots' last strike, which grounded around 20 percent of flights on June 11-14, hit France as it was gripped by social unrest over a series of disputed labour reforms from the Socialist government.

Air France-KLM said Wednesday it managed to cut its net loss significantly in the first half of this year but warned
attacks had reduced the attractiveness of France as a travel destination.

“The global context in 2016 remains highly uncertain regarding the geopolitical and economic environment in which we operate,” the French-Dutch airline group said in a statement, citing “a special concern about France as a
destination”.

The group cut its net loss to 114 million euros in the first half of the year compared to 638 million in the same period in 2015.

On an operating basis, it made a profit of 218 million compared to a loss of 238 million.

While the airline group even managed a net profit of 41 million euros in the second quarter, it noted a “clear deterioration during the quarter” in revenues, which dropped by 5.2 percent.

More information on the strike is available on the Air France website but below is what they are offering customers affected.

“If you wish to postpone your trip, we offer you the following commercial measures.


If you have planned a trip on an Air France flight between July 27 and August 2, 2016:
– You can bring your trip forward on 26 July 2016, or postpone your trip from 3 to 12 August 2016 inclusive. You can change your reservation at no extra cost in the same class of travel.

You can make these changes on this website*, in the “Your reservations” section, on our mobile sites or from your travel agent.

– You can also postpone your trip beyond 12 August, 2016, change your origin or destination or if you no longer wish to travel, you can receive of a non-refundable voucher valid one year on Air France, KLM or Hop!
In this case, you may contact your travel agent.

What should you do on the eve of your trip?

Before you go to airport, if the flight is “operated by Air France”, we recommend that you check the information of about your bookings on our website or mobile app in the “your reservations” section.

If your reservation is cancelled, we recommend that you do not travel to the airport. Our staff will do their utmost to offer you an alternative solution.
Otherwise, you will be able to change your flight independently on our website, or contact your travel agent.“