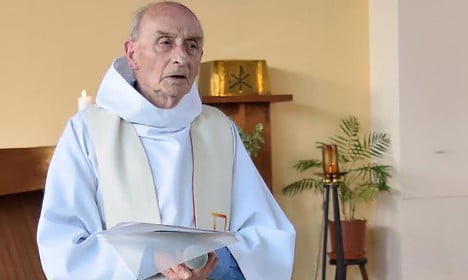 The local parish in Saint-Etienne-du-Rouvray, the city of Rouen and indeed the whole of France has been left sickened and shocked by the cold-blooded and brutal killing of 85-year-old Jacques Hamel.

During Tuesday's mass in Saint-Etienne-du-Rouvray, in the suburbs of Rouen, Hamel was filling in for the church's officiating priest, Auguste Moanda-Phuati, who has been the parish priest for the past five years.

Instead of retiring at age 75 as priests are allowed to do, Hamel decided to keep working.

“In my absence he was the one who officiated in the church,” Moanda-Phuati told RTL. “He’s a courageous priest for his age.

“Priests are allowed to retire at 75 years old but as he still felt strong, he said to himself 'there aren’t enough priests' and so because he could still be of service, he preferred to stay where he was and keep working.

“I could not possibly imagine that such a thing would happen to us,” he said.

Moanda-Phuati had just returned to his home country of the Congo for the holidays, but planned on coming back to the church by Tuesday afternoon, he told the Liberation newspaper.
Other locals described Hamel as a respected member of the small community.
A man named David, whose marriage was administered over by Hamel, said: “He was someone who believed in love, and in human values.”

“My family has lived here for 35 years, we always knew him,” a friend of the priest told l’Express newspaper.

“He was someone who was very appreciated in the town. He was very inconspicuous, he never liked putting himself first.”

Mohammed Karabila, president of the Regional Muslim Council of Normandy, said he was “distressed at the death of his friend”.

“Our religious communities always worked together,” he said. “For the past 18 months, and the beginning of the attacks in France, we had meetings in the interfaith committee, and we communicated a lot.”

He described Hamel as “a man of peace, of religion, with a certain charisma. A person who dedicated his life and his ideas to his religion. He sacrificed his life for others.”

Some members of the community who knew Hamel expressed their shock on Twitter.

“The priest that married my parents, that baptized me…” one said of Hamel.

“The priest that was killed is the one who recently baptized one of my little cousins,” wrote another.

The archbishop of Rouen, Dominique Lebrun, has called for peace in reaction to the priest's death.

“The Catholic Church can take up no other weapons than prayer and fraternity between men,” he said in a statement.