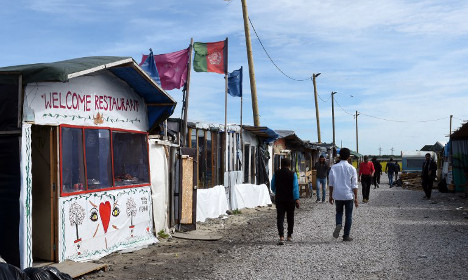 The "Jungle" migrant camp in Calais. Photo: AFP
A local government spokesman said migrants from Sudan, Eritrea and Ethiopia clashed with those from Afghanistan on Monday night, stabbing each other and hitting each other with sticks.
A 37-year-old Ethiopian died after being knifed in the chest, he said.
Police intervened several times in the clashes.
Fights often break out in the sprawling camp, home to thousands of migrants hoping to find a way across the Channel to Britain.
On May 26th, 40 people were injured in a fight between Afghan and Sudanese migrants.
The spokesman said the migrants had also constructed about 30 barricades in the road in a bid to stop and board trucks heading to Britain.
Last week a migrant of unknown nationality was found dead on the highway near Calais, and local officials said he likely died while crossing the road or falling off a truck. He was the eighth migrant killed since January trying to make it to Britain.
Authorities say there are about 4,500 migrants in the camp known as the “Jungle”, however charitable organisations estimate the figure is as high as 7,000.