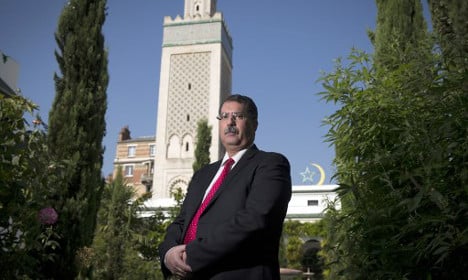 CFCM President Anouar Kbibech in front of the Grande Mosque in Paris, June 2015. Photo: AFP
The nationwide French Council of the Muslim Faith (Conseil français du culte musulman or CFCM) denounced the attack as a “terrifying and horrifying act” and expressing its solidarity with “all Catholics of France”.
“[We call on] all leaders of different faiths to meet, exchange and fight against this hateful speech,” the CFCM said.
Their calls were backed by the Muslim group CRCM (Conseil régional du culte musulmam), which announced that it would hold a minute of silence for the victims on Thursday.
Meanwhile, the imam of the mosque in the northern French town where a church was attacked Tuesday said he was “stunned” by the murder of the local priest, who he described as a friend.
“I don't understand, all of our prayers go to his family and the Catholic community,” said Mohammed Karabila.
Two armed men stormed the church during morning mass in Saint-Etienne-du-Rouvray, taking at least five people hostage before slitting the priest's throat and leaving another person in a critical condition.
The attackers, who the Islamic State group described as “soldiers” for the jihadist movement, were shot dead by police.
Karabila said he was “stunned by the death of my friend. He was someone who gave his life to others. We are dumbfounded at the mosque.”
He said he and Jacques Hamel, who was in his eighties, had met on several occasions and had been part of an interfaith committee for the past 18 months.
“We talked about religion and how to live together. It has been 18 months that civilians have been attacked, now they are attacking religious symbols, using our religion as a pretext. It is no longer possible,” he said.
The town's mosque was inaugurated in 2000 on a piece of land gifted by the Catholic parish.
It was in this mosque that the funeral ceremony was held for Imad Ibn Ziaten, a 30-year-old parachutist who was killed on March 11, 2012 by jihadist Mohamed Merah.
“It is a total shock, it brings back the pain,” said his mother Latifa Ibn Ziaten, who launched an association to fight Islamic radicalisation after his death.
Like other towns around the city of Rouen, Saint-Etienne-du-Rouvray has a growing problem with radicalisation, she added.
“There are a lot of families that come and see me because their children are radicalising,” she said.