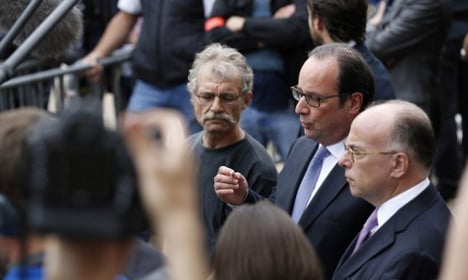 President Francois Hollande vowed Tuesday to wage war against terror group Isis “by every means” within the law after two men linked to the jihadist group killed a priest in a French church.

“We are confronted with a group, Daesh, which has declared war on us,” Hollande said, using an alternative name for Isis.

“We have to wage war, by every means, (but through) upholding the law, which is because we are a democracy.”

Hollande was speaking in a lightning visit to the northern French town of Saint-Etienne-du-Rouvray, just hours after the attack took place.

Shortly after he spoke terror group Isis claimed responsibility saying that its “soldiers” had carried out the attack.

“The perpetrators of the Normandy church attack are soldiers of the Islamic State who carried out the attack in response to calls to target countries of the Crusader coalition,” the Amaq news agency said, citing a “security source”.

The two assailants entered a local church, slitting the throat of an 84-year-old priest and leaving another hostage with life-threatening injuries, before being killed by police as they left the building, police said.

Hollande said the assailants “claimed to be from Daesh” and branded the assault as a “vile terrorist attack”.

“The Catholic community has been hit, but it is all of the French public which is concerned,” Hollande said.

He called for national unity in the face of terrorism, urging the French people to “create a solid bloc that no-one can split”.

France remains on high alert after Tunisian Mohamed Lahouaiej Bouhlel ploughed a truck into a crowd of people celebrating Bastille Day in Nice, killing 84 people and injuring over 300.

The July 14 massacre was the third major terror attack in France in little more than 18 months.

The string of bloody incidents has left the country jittery and stoked political finger-pointing, with conservative politicians accusing the ruling Socialists of being weak or incompetent on security. French police officers at the scene in Saint-Etienne-du-Rouvray. Photo: AFP