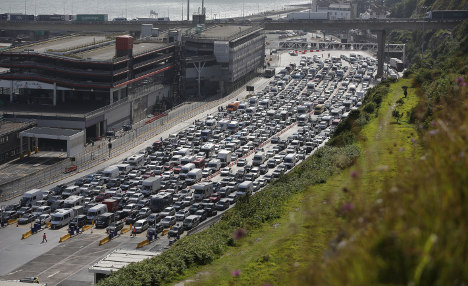 Tens of thousands of British motorists had to wait hours in sweltering heat just to get across the Channel to France at the weekend with the blame for the chaos and misery placed firmly at the feet of the French.

The tailbacks were caused by French border control officers searching every single car that was coming in to France.

Many cheesed off motorists and sections of UK media suggested the move was done as simple revenge for Brexit.

Some suggested the French president was playing a cynical move to show the UK what the future will be like outside the EU, while others even referred to it as an anti-British “Brexit hate crime”. A poll on the Daily Mirror website that received hundreds of votes revealed 73 percent suggested the rigorous car checks were motivated by revenge.

But what a load of Brexshit.

While the blame can be laid on the French for a lack of planning and a lack of resources (and for the UK government for that matter), suggesting it was an act of revenge to spite the Brits is something the gratuitous French-basher turned Foreign secretary Boris Johnson (the foreign secretary!) would come up with.

“Why on earth would France damage their relationship with one of their biggest markets?” said John Keefe from Eurotunnel. “Tens of thousands come from the UK to France each year, whether as second home owners or holidaymakers — they wouldn’t want to put that at risk. This Brexit argument is daft.”

There were also suggestions that police unions may have staged the chaos themselves as part of an internal struggle to put pressure on their bosses to increase their working conditions and staff numbers, as they have done in the past at airports.

But that doesn’t appear to be the case either.

“If this was true then the French unions would normally make a big song and dance about it, but no union has claimed responsibility for anything,” said Keefe. “They would also have to be brave to own up to putting holidaymakers through 14 hours of queues in the summer heat.”

No, the chaos in Dover was caused by a direct result of France being hit by its third devastating terror attack in 18 months in Nice  on July 14th – and its failure to adapt or increase its resources to the heightened security measures. Anyone who has travelled through Charles de Gaulle airport at peak times in recent months will have vented anger at the lack of border patrol officers to check passports, which has prompted queues to snake around the airport.

But it's not just a question of being understaffed.

After the Nice terror attack French border patrol officers (Police aux Frontieres) stationed in Dover have been ordered to search each and every car coming from the UK into France, compared to the past when random checks on vehicles would be carried out.

Normally that may not have had too much of an impact but on the weekend in the year when tens of thousands of Brits head across the Channel for their summer holiday, it caused absolute chaos.

And the French could and should have been prepared for it, especially as the Port of Dover insisted they had been warned about a serious shortfall in the number of border patrol officers.

At one point on Friday night one French officer was left alone to search dozens of coaches, which takes around 40 minutes for each vehicle.

There were some red faces on the French side of the Channel on Monday.

Jean-Marc Puissesseau, the head of the port of Calais said he was “ashamed” of the travel chaos and said he would complain to French authorities to make sure it doesn’t happen again.

“When we know that there will be big traffic, as there was yesterday, it should be organised,” he said. “If the French police are obliged to check everything because of the terrorism we face then I understand it, but what I cannot understand is that they don’t put enough police on control.” (Long queues to get through passport control at Charles de Gaulle airport.)

France however has faced a huge pressure on its border patrol teams since the November attacks, when it effectively restored its internal borders with other EU countries.

As part of the state of emergency PAF officers have been stationed at main routes into France from Belgium and Germany and ordered to carry out random checks. The government says around four million checks have been carried out since November.

One British newspaper suggested that the queues at Dover “may be the first sign of what it means to live outside the European Union”.

“The snakes of traffic outside Dover are a reminder that we cannot expect life to carry on as normal after Brexit,” its editorial said.

But the reality is the queues are more a sign of how the terror attacks and France’s reaction to them are impacting life in France and that goes for tourists too.

Perhaps we cannot expect life to just go on as normal.

But given that’s exactly what the French government is desperate to see happen, it could really do with hiring many more border patrol officers.