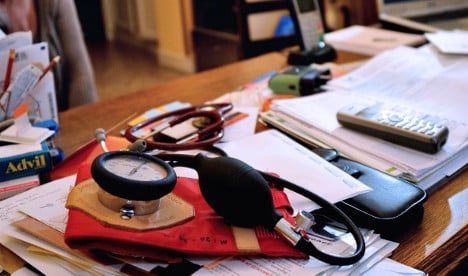 Most French people in the hospitality industry — hotels, restaurants, bars— speak English, so you can usually get food and accommodation without speaking a word of French.

You can even work in France without needing much French—  such as a bartender or an English teacher for example — and get by with speaking the bare minimum of the language.

But there are some places in France where knowing French is absolutely essential. Here’s a roundup of the nine places or situations where you’re going to need it most.

Any office of French administration It could be the Prefecture, the Pole Emploi (employment center), the CAF (housing assistance), the Prefecture de Police , the CPAM office to get your carte vitale… A visit to any of these administrative centers in France strikes fear into the heart of most foreigners, who consider going to these places about as much fun as doing taxes, stepping in dog poo on the sidewalk, or using a computer with a slow Wi-Fi connection.
Renewing visas, exchanging driver’s licenses, incomplete “dossiers“, hours of waiting… it’s the stuff of nightmares. Administrative workers tend to be the least sympathetic toward those who don't speak French, mainly because there’s the sentiment that those wanting to settle in France should be able to speak the language pretty well.
Having at least a conversational level is crucial, or else you’ll need to bring a French friend along to help out. And ask and ask again. Even if it minds driving them mad.
The cheese/wine/meat shop One French learner we know know well has refused to go into any fromagerie out of fear for what will happen in there. The same goes for the boucherie (butchers) and the wine merchants.

Sure, it’s easy enough to just point out your trusty old Brie or Camembert or the slab of beef or pick up any old bottle of red, but if you want to know what your buying or want advice for what cheese to get or what wine to go with what cheese then you'll need to learn the lingo and some specific vocab.

But if you actually want to know what differentiates certain cheeses, get recommendations based on your taste and be sure to get a cheese you like (even if it’s one you haven’t tasted before) you need to be able to converse with the fromager.

They’re always more than happy to share their priceless cheese wisdom if you can speak a little French.

ALSO: How to be on your best briehaviour: A guide to French cheese etiquette While some English-speaking doctors can be found in Paris, expats living elsewhere in France can never bet on it.

Ideally when going to the doctor’s office, you should be able to explain your symptoms and perfectly understand the instructions your doctor gives you for treatment.

It could spell disaster if your doctor gets the wrong idea of what's wrong with you (or at least lead to embarrassment).

Another person The Local France knows very well says he ended up naked in one consultation with a French doc even though he only went in with a sore throat. He reckons cupping his hands to stress how big his tonsils felt might have been the problem.

Best learn the vocab before you go. And just point.

Going to the bank in France can be a stressful experience for foreigners. Just to open a simple checking account requires navigating reams of paperwork, providing proof of housing and a work contract or proof of school enrollment, and promising your first-born child.

And tasks such as international wire transfers or setting up automated payments that require specific French vocabulary can’t always be done online as some foreigners might be used to in their home countries.

And just wait until something goes wrong and you have to go in and explain they have charged you too much.

To make your life a bit easier, here are our five key tips to opening a bank account in France.

Photo: AFP
A French dinner party is one place where you’ll really feel out of place if you don’t speak French.
Sure someone might be polite enough to speak English with you at first. But once the French get going on their lively debates, you can either sit in silence and lose all will to live, or have a high enough level of French to join in.
Reaching dinner party level French is tough, but until you're there you are at least guaranteed good food and good wine.
The post office

Sending letters and packages home to family members and friends is just another part of expat life. But it can be tricky if you don’t even know how to say “expedited” in French (no, it’s not “expédié”) or “It needs to get there in three days or my sister will think I forgot her birthday.”

You also don’t want to find yourself uncomprehendingly agreeing to some super fast, heavily-insured delivery plan and paying 14 euros to send a greeting card.

The hair salon
Photo: Adam Sacco/Flickr
Sure, getting a bad haircut isn’t quite as serious as mixing up medications (although some might dispute that statement), but the hair salon is still a place where a certain level of French knowledge is necessary.
You can show the hairdresser all the celebrity haircut photos you want, but if you can’t explain exactly what you want done to your hair, there are sure to be misunderstandings and you’ll walk out of a French salon de coiffeur much sadder and and worse-coiffed than you walked in.
On the phone
If you’ve even managed to dial the right phone number (curse those tricky French numbers), you’ll soon learn that rudimentary French won’t get you through most phone calls.
Speaking and understanding French becomes a thousand times more difficult when you can’t see the face of the person with whom you’re speaking.
You get no context clues from facial expressions or gestures and you can’t mime actions for words you don’t know how to say.
You just have to be able to communicate well in French, plain and simple.
The real estate office

When finding a place to live in France, knowing all the renting and buying lingo such as caution (deposit), alimentation (water/electricity supply) and charges comprises (utilities included) is absolutely essential.

Otherwise you might find yourself living in a closet-sized (and closet-less) studio apartment with no windows, no bathroom, and barely room enough to stretch out your arms. Oh wait, that’s just normal life for renters in Paris…

When you're in trouble with the law

Not stamped your train ticket and want to get out of paying a fine? Gone through a red light in your car or even on your bike? Been caught for speeding? Been a little too raucous in the street? Yes, you know trying to come up with an excuse in French was impossible and the whole “I don't speak French” thing just doesn't work.

The same goes for if you are victim of a crime. In short if you want to converse with the French cops, learn their language.