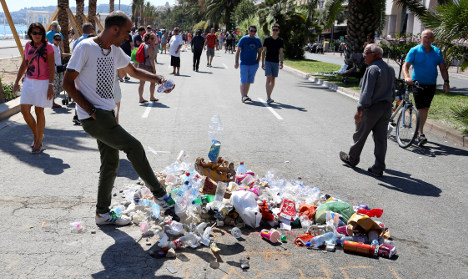 A pilce of rubbish marks the spot where Nice truck attacker Mohamed Lahouaiej Bouhlel was shot by police.

Not all jihadists are psychopaths, and not all psychopaths turn violent.

However when a person craving violence is drawn in by Islamic State ideology offering them glory and a sense of belonging, it provides a volatile mix that can lead to the kind of massacre seen in the south of France last week, experts say.

French investigators are at a loss to explain the motives of Mohamed Lahouaiej Bouhlel, a Tunisian who crushed 84 people to death with a truck in an IS-claimed attack in Nice after an apparent lightning-fast radicalisation.

Bouhlel and Sunday's night's suicide bomber in Ansbach Germany are just the latest in a long line of attackers inspired by IS extremists to be described as suffering from mental or personality disorders.

Like Omar Mateen, who shot dead 49 people in a gay Orlando nightclub, Bouhlel was cruel to his wife and children, according to prosecutors, and was reported to be chillingly calm during the attack.

Investigators found gruesome evidence on his computer of corpses and searches for images of car accidents, and those interviewed by police said he had shown no sign of religious fervour until recently.

“Could he have become extremely religious willy-nilly, or was he cherry-picking what he likes about IS, because what he really liked was the violence?” said Mary-Ellen O'Toole, a retired FBI profiler.

“IS didn't create this guy, but he was already well on his way and IS was the conduit.”

Profiling terrorists is a major headache for security and intelligence forces, with motives as wide-ranging as the kind of people drawn to carry them out.

“Terrorist acts are behaviours, with all kinds of different motivations and combinations of motivations.  The acts and motivations are usually logical – not 'crazy' or 'senseless' – to the perpetrator,” forensic psychiatrist William Reid told AFP.

“History and current news is full of examples of killing people without mental illness or instability.”

' A magnet for psychopaths'

However experts are not surprised that IS, with its brutal propaganda videos, appeals to those considered mentally disturbed.

Brian Michael Jenkins, a terrorism expert with the US-based RAND think tank, said that IS' brutal online propaganda would likely only appeal to those who were “already sliding between a fantasy world and a real world.”

“It is difficult to remotely motivate ordinary individuals to carry out horrendously destructive and self-destructive acts. IS in particular is a magnet for psychopaths.”

Experts say there are numerous reasons why IS lures jihadists, from resonating with their personal anger and feelings of injustice to offering them an extreme belief system and psychological rewards of participation or rewards in the afterlife.

Jenkins said the poor level of understanding of Islam of many jihadists meant religion alone could not explain their acts.

“Radicalisation may consist of nothing more than embracing Daesh's flag, the religious component may be no more than brief encounters on the internet.”

The Islamic State “will applaud their actions, it will make them a hero. It offers identity, meaning, participation in an epic struggle. It offers them a passage to paradise.”

Many people interviewed by investigators described Bouhlel as “someone who did not practise the Muslim religion, ate pork, drank alcohol, took drugs and had an unbridled sexual activity”.

His father told AFP he suffered depression and had fits of rage, “screaming and breaking everything in front of him.”

When he was 19, his father took him to see a psychologist, who told L'Express news magazine he “suffered from an altered reality and behaviour problems. The beginnings of psychosis.”

Paris prosecutor Francois Molins said that roughly eight months ago Bouhlel had shown videos of a hostage being decapitated to a friend, and that he had a “clear, recent interest in the radical jihadist movement”.

“This is a person who days before the incident was researching what he was going to do, fuelling his obsession with violence by watching all this stuff.

“That's not mentally ill, he is thinking strategically,” said O'Toole.

Psychopathy is a personality disorder, not a mental illness, although it can be present alongside other psychological disorders.

“He did a recon beforehand, he was taking pictures of himself on the day of the attack. If he knew what he was going to do later that night he certainly wasn't stressed by it.”

While unable to say whether Bouhlel suffered any mental illness, O'Toole said the majority of his traits were “only seen collectively in someone who is psychopathic.”

“This is probably one of the most callous crimes you and I have ever heardof, it's very cold-blooded and it's predatory. He was  actually hunting people to drive over.”

“That's not just the result of watching one too many violent videos. That's part of your personality.”

O'Toole said that the profiles of so-called “lone-wolves”, acting from afar on orders by IS to kill its enemies, meant it was hard for security services to spot them, as their warning behaviours would only be visible to family and friends, who needed to be trained to spot them.