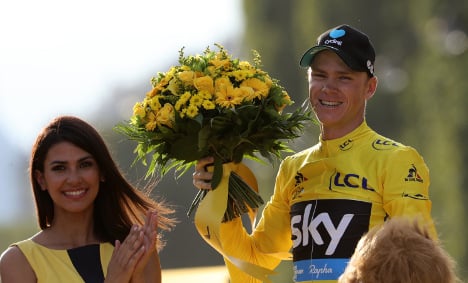 With the top contenders watching each other like hawks and generally remaining close together, young Briton Adam Yates took a rare opportunity to streak clear and steal a few seconds on the seventh stage. But his progress was halted in stunning fashion as the inflatable archway indicating the final kilometre collapsed on him. A fan had accidentally dislodged a pin and the arch came crashing down, knocking Yates off his bike and leaving him with a bloody chin. “I've got stitches in my chin and my legs are sore but I got pretty lucky,” Yates said.

Arguably the eighth stage was the one that set the tone for what was to follow as Froome demonstrated a never-before-seen dexterity. The renowned time-trialer and climber proved just as agile on a breakneck descent to the finish of the stage in Bagneres-de-Luchon. “It was when we went over the top of the mountain, I thought, 'maybe I can make a difference here'. I tried, it was incredible as I'd never won a stage like that,” said Froome. He attacked over the top of the final climb and while Nairo Quintana, his expected main rival, hesitated, Froome adopted an awkward, crouched position on his bike while pedalling furiously to snatch 23 seconds from his main challengers, winning the stage and claiming the yellow jersey that he would never relinquish.

Froome consolidated not only his lead in the race but his growing reputation as the complete rider as he broke away alongside world champion Peter Sagan in the final 12km of the 11th stage. “All day my team-mates protected me, right to the end of the stage. When I saw Sagan go away I thought, 'I have to follow him and maybe together we can get there',” said Froome.

He predictably lost the sprint finish to Sagan but his mastery of the perilous crosswinds, helped by faithful lieutenant Geraint Thomas, allowed him to snare another 12 more seconds.

The image that will ensure this Tour lingers long in the memory is that of the yellow-shirted and yellow-helmeted Froome running, bike-less, to the finish line on the iconic Mont Ventoux. Pandemonium reigned in the final kilometre of the 12th stage as encroaching fans blocked the road to the finish, forcing a photographer's motorbike to stop short.

Richie Porte crashed into the back of it, with Froome and Bauke Mollema following suit. “I heard on
the radio our car was a long way back, there was just a kilometre to go, I thought: 'I've got to keep going forward',” said Froome.

His bike was broken but not his champion's spirit. He simply set off on foot until a replacement bike could be proffered. And again, he increased his lead.

A rare moment of drama for Froome, potentially more penalising than his fall on Ventoux. Froome hit the deck again, this time on a slippery descent as rain fell on the 19th stage.

But again he didn't panic, and Thomas came to his aid, handing over his bicycle for Froome to ride the final 25km to the finish, bloodied and bruised. “I thought straight away: 'I have to change bikes again and get going again'. I had no doubts, I looked for my team-mates, my friends. Geraint Thomas gave me his bike right away. That's the race, the race goes on, it doesn't stop,” said Froome. He lost a handful of seconds to fellow rivals but actually gained time on Mollema, thus again, despite adversity, extending his lead.