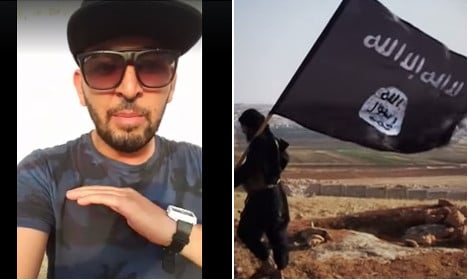 Terror group Isis have made a lot of enemies in France, not least Henni Mohamed, whose expletive-laden video rant against the jihadists has gone viral – and even prompted Isis to respond.

Mohamed, a Marseille native of North African origin, has become embroiled in a war of words with the terror group, who have claimed responsibility for recent terror attacks in France.

Mohamed did not take kindly to a new video released by French jihadists last week who threatened to carry out attacks in his home city. He posted a fiery video online which features a seven minute expletive-riddled rant against the so-called Islamic State.

Mohamed's video is perhaps not the most eloquent response to the spate of Isis-led or Isis inspired terror attacks in France, but it is probably one of the angriest and given it’s been viewed over 1.4 million times, one of the most popular.

And it does offer a good lesson for those who want to learn French insults and swear words.

It was inspired by last week’s new video released by two French speaking jihadists who threatened more attacks on France, including Marseille, where there is large immigrant population of Muslim North African origins.

Once all the swear words and rude insults have been taken out of the video, there is not much left of Mohamed’s rant. But he does blast the jihadists for “having nothing to do with Islam”, thinking they are the only ones who talk for God, and for basically having “completely lost plot”.

He then warns them that if they want war “then come to Marseille”.

“We have got Kalashnikovs and rocket launchers, come to Marseille,” he added. The Mediterranean city has a reputation for gun crime and a fierce turf war between drugs gangs, whose weapon of choice is the AK 47.

“There are only Muslims here, Algerians, Moroccans and French. So what are you actually fighting for?” he added.

And then in possibly the most cutting insult and one we can print, he says. “Who do you think you are, the Power Rangers?”

Perhaps it was those words that prompted Isis into a response on their social network sites, a fact that was picked out by France-based jihadist specialist David Thomson.

For a start Isis scolded Henni for his bad language and called him a “thug” (racaille).

“You claim to be Muslim but Islam has nothing to do with you and especially not your actions. You accuse us of smearing Islam, but it’s you that dirties Islam more than anything else with the vulgar words that come out of your mouth every two seconds,” the group said.

“Finally it is not a band of thugs who defend their city as though he was a mayor who will scare us, given that 120,000 bombs have fallen on our territory from the sky and Isis is still here, thanks to Allah.”

Henni is yet to respond.

He was not the only native of Marseille who reacted to the threat against the city.

Hundreds of tweets mocked the idea of Isis attacking a city “where there are more Kalashnikovs than in Syria” and where the jihadists will probably be shot by a stray bullet in a fight between drugs gangs.