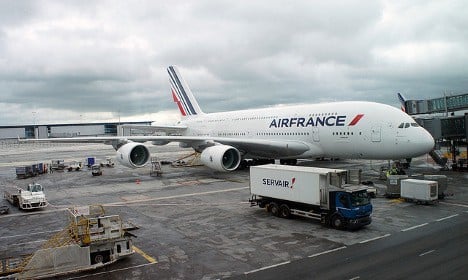 The SNPNC and the Unsa-PNC unions, which represent around 45 percent of the company's stewards and air hostesses, look set to go ahead with their planed from July 27th to August 2nd strike after failed negotiations with Air France chiefs.

A final seven-hour round of talks on Friday between unions battling to preserve workers' rights and newly installed Air France-KLM chief Jean-Marc Janaillac failed to reach a solution.

Some estimates say 130,000 Air France passengers are threatened by the seven-day walk-out, with internal and medium haul flights within Europe will be the worst affected.

More details on the flights cancelled will be made public later on Monday.

Other air lines run by Air France including Hop! and Transavia will not be affected, neither will partner airline KLM.

In their press release published on July 24th, the unions said they expected an “historic mobilization that could hit 70 percent of staff on the first day.”

“We don’t go on strike at such a time that risks comprising the recovery of Air France”, he said in an interview with Le Parisien newspaper.

“It shouldn’t be forgotten that 2015 was the first year in six years that we’ve shown a positive result,” added Gagey. “It would really be a shame for the company to lose money again.”

But union leaders are firm that the Air France direction had its chance to resolve the issues.

“We informed the direction of this strike on June 3rd — we gave them two months to discuss it,” Christophe Pillet, from the SNPNC union, said on RMC radio on Monday morning. “They didn’t use that time.”

Stewards and hostesses have been pushing for a five-year renewal of their collective agreement that covers their rights, the rules of work and their pay.

The agreement expires in October and Air France only want it to last 17 months, before it is then up for negotiation again.

The third largest union, Unac with 22 percent of workers, were also in talks about the strikes but decided to postpone their call to action until October.