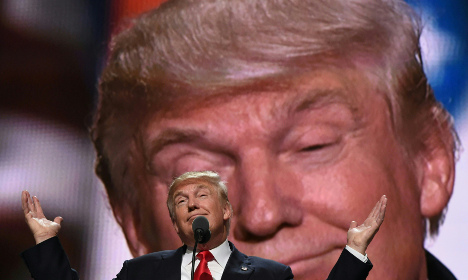 Trump was asked in an interview airing Sunday on NBC’s “Meet the Press” to expand on his proposal to suspend immigration from what he calls countries “compromised by terrorism” until vetting mechanisms are in place.

“I’m going to be coming out over the next few weeks with a number of the places,” said Trump according to an excerpt of the interview.

“Meet the Press” host Chuck Todd asked specifically if the proposal would limit immigration from France, saying: “They have been compromised by terrorism.”

“They have totally been,” Trump responded. “And you know why? It’s their own fault. Because they allowed people to come into their territory.”

The candidate has repeatedly called for “extreme vetting” to be put in place for such nations to protect the United States from the risk of attack.

Trump denied the policy amounted to backing away from his previous call for a temporary ban on Muslim immigration.

“I actually don’t think it’s a rollback. In fact, you could say it’s an expansion. I’m looking now at territory,” he said.

“Just remember this,” Trump said. “Our Constitution is great. But it doesn’t necessarily give us the right to commit suicide, okay?

“Now, we have a religious, you know, everybody wants to be protected. And that’s great. And that’s the wonderful part of our Constitution. I view it differently.”