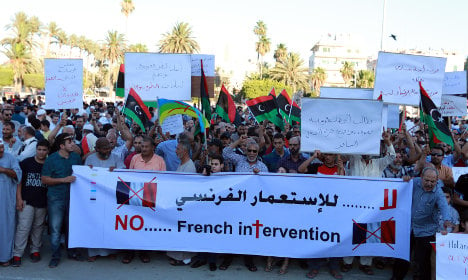 Dozens of protesters rallied Friday outside the GNA’s former headquarters in a Tripoli navy base. Photo: AFP

The call by militias in the second city of Benghazi came after French President Francois Hollande confirmed on Wednesday that his country has soldiers in Libya.

Hollande made the announcement after three French troops were killed in Libya during a mission to gather intelligence.

His remarks sparked anti-French protests in several Libyan cities, while the UN-backed Government of National Accord (GNA) said the presence of foreign troops was a “violation” of Libya’s sovereignty.

A military commander allied with a rival government based in eastern Libya has said that French troops along with US and British soldiers were in Libya to “monitor” Islamic State group jihadists.

The extremist group seized the Libyan coastal city of Sirte in June last year, raising fears that it is establishing a new stronghold on Europe’s doorstep.

The armed groups, known as the Revolutionary Shura Council of Benghazi, urged Libyans to rise up against the deployment of foreign troops in the chaos-wracked country.

“We call on all the Libyan people to mobilise and defend their (Muslim) religion… and expel” all foreign troops from Libya, a statement said.

The French military presence in Libya is tantamount to a “crusader’s invasion”, it added.

Dozens of protesters rallied Friday outside the GNA’s former headquarters in a Tripoli navy base and called on authorities to boycott French firms.

The Pentagon said in May that it had a “small presence” in Libya tasked with trying to identify which groups might be able to assist the United States in its mission to combat IS.

British media reported in May that British special forces had taken part in combat missions against IS in the country’s northeast.

Rival militias in Libya have been vying for power since the overthrow of veteran dictator Moamer Kadhafi in 2011.

Amid the chaos, the GNA, which is the result of a UN-backed power-sharing agreement in December, has been striving to assert its authority.

Troops loyal to the unity government are battling to recapture Sirte from IS.

Benghazi meanwhile has seen bloody battles for more than two years between armed groups, including jihadists, and forces loyal to the internationally recognised parliament, which has yet to endorse the GNA.