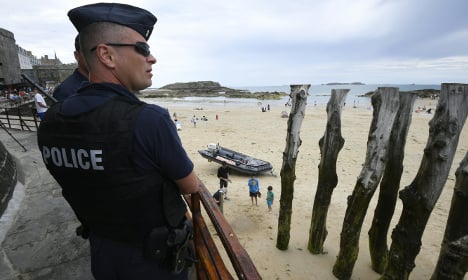 The Nice assault was the third major attack on French soil in the past 18 months. Photo: AFP

Interior Minister Bernard Cazeneuve has been the lightning rod for accusations that authorities dropped their guard after the June 10th-July 10th football tournament, leaving the Bastille Day celebrations targeted in last week's massacre in Nice exposed.

Five suspects have been formally charged over the July 14th truck attack in the French Riveria city that killed 84 people.

Hollande said Cazeneuve, who has shrugged off opposition calls to resign, had his “full confidence” and announced he would ship weapons to Iraqi forces fighting the Islamic State (Isis) group which claimed the attack.

“I took the decision as part of the anti-Daesh coalition to make weapons available to Iraqi forces,” Hollande said after a meeting of key ministers and security chiefs, using another name for Isis.

“They will be there next month,” he added.

An aide to the president said the weaponry would include artillery batteries and that France – a member of the US-led anti-Isis coalition – would also send military advisers to train Iraqi forces in using the arms.

Eight days after Mohamed Lahouaiej Bouhlel rammed a lorry into crowds enjoying a firework display on Nice's seafront promenade, 12 people are still fighting for their lives in hospital, Hollande said.

The Nice assault was the third major attack on French soil in the past 18 months, after the militant carnage in Paris in November and the shootings at a satirical magazine and kosher supermarket in January 2015.

Isis has claimed Bouhlel, a Tunisian national, as one of its “soldiers” but given no proof of his affiliation. The group threatened further attacks in a video this week.

Cazeneuve has launched an investigation into potential security oversights.

The Liberation newspaper reported on Thursday that only one police car was stationed at the entrance to the Nice promenade on the night of the attack.

Five suspects have been charged over the rampage, which Bouhlel, who was shot dead by police, appears to have been plotting for months.

The others are 22-year-old Franco-Tunisian Ramzi A., 38-year-old Albanian Artan H, and his wife Enkeledja Z. who holds both French and Albanian nationality.

None were previously known to the intelligence services.

Mohamed Oualid G. filmed the scene the promenade after the carnage as it crawled with paramedics and journalists, prosecutor Francois Molins said.

In April this year, Chokri C sent Bouhlel a Facebook message reading: “Load the truck with 2,000 tonnes of iron … release the brakes my friend and I will watch.”

Ramzi, Chokri and Oualid are charged with being accomplices to murder by a terror group.

Ramzi and the Albanian couple were also charged with providing Bouhlel with the gun he fired at the police officers who raked his truck with bullets, ending the massacre.

Investigators initially said Bouhlel appeared to have undergone a lightning-quick radicalisation but the picture emerging is of a long-planned attack.

The prosecutor said on Thursday that photos on his phone showed he had already staked out the same July 14th event in Nice a year ago.

Acquaintances of the father of three, who had been living in the city for around a decade, said he had shown little interest in religion and was prone to violence.

But the probe has revealed a fascination with jihad dating back at least a year.

In May 2015, he took a photo of an article about the drug Captagon, an amphetamine used by militants in Syria.

Parliament this week extended the state of emergency in place since the November Paris attacks for a fourth time.

The security laws allow the authorities to carry out searches by day or night, without a warrant from a judge, and to place people under house arrest.