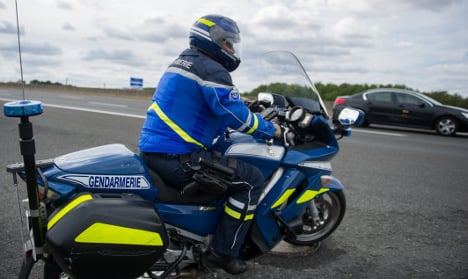 The bus ended on its side in a ditch. Two helicopters were dispatched to the site. Photo: AFP

The bus skidded for around 250 metres (yards) before ending up on its side in a ditch.

One of the youngsters is thought to have sustained life-threatening injuries, according to local emergency services.

The two most seriously injured are both 16 and from southwestern England, said local deputy prefect Laure Lebon, adding all passengers had been wearing their seatbelts, preventing more serious injuries or deaths.

“Circumstances would suggest the driver fell asleep,” said Lebon, adding the driver was not speeding and was not driving under the influence of alcohol or drugs but was shortly due to be relieved.

The bus was headed for Italy when the driver lost control on a motorway near Lons-le-Saunier, around 100 kilometres (62 miles) from the Swiss border, police said.

Fifty people were on board the bus, 42 of whom were adolescents.

Two helicopters and 10 ambulances were dispatched to the scene and 60 firefighters were deployed after the mid-morning crash.

A spokesman for Britain’s Foreign Office said British authorities were in contact with French officials in the area of the crash.