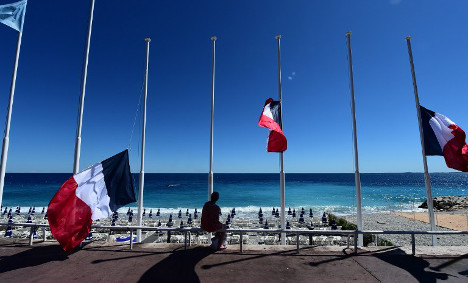 The knock on effects of each terrorist attack in France are now sadly becoming predictable.

The government puts more soldiers, armed police or now reservists on the streets, the opposition politicians call for all kinds of extreme, very-un French measures like a Gallic Guantanamo and the country descends into yet more soul-searching about why it has once again been targeted.

But one of the biggest and most tangible impacts of each attack is on the local economies where the atrocities took place, in particular in the area of tourism.

In a reflection of what happened in Paris after the November attacks, businesses in Nice this summer are expecting a tough few months with tourism expected to drop significantly at what is supposed to be the busiest time of the year for the French Riviera.

After Paris, it took weeks, if not months for diners to feel confident enough to return to the terraces of restaurants and bars and all the time patrons saw their takings tumble. After the bus rampage in Nice, many tourists from France and abroad will no longer fancy the idea of strolling down the famous Promenade des Anglais, forever scarred by the massacre of July 14th 2016.

Reservations have dropped by up to 30 percent in some sectors of the tourism industry, the government said this week.

Experts say the more frequent the attacks, the longer the tourists will stay away and the greater a blow it will be for France.

The number of tourists arriving on regular flights has fallen by 5.8 percent since January, including by 11 percent in Paris. We can expect those percentages to increase now.

The tourism industry is critical for France and it directly employs two million people.

At a time when France is suffering from record unemployment and a struggling economy, the last thing it needs is to see its world-renowned tourism industry suffer the disastrous consequences of the actions of a tiny number of murderous individuals.

Sadly some events in Paris have already had to be cancelled due to security concerns, while others like the mammoth Bayonne festival will go ahead.

Here at The Local we often receive messages from worried potential visitors asking whether it’s safe to come to France. “We are here for three more weeks and then planned to go to Paris, which is my son's dream. He is now scared to go. I don't want him to live in fear, but I also want to keep him safe,” was one such message this week.

Being scared is understandable, so too is having second thoughts about coming to a country where the Prime Minister says we are at war and we are just going to have to get used to it.

But putting fears to one side is the best way of showing real solidarity with the locals, who have no choice but to overcome their own and get on with their lives, as those living in Nice told The Local this week.

In responding to the fears of football fans worried about coming to France for Euro 2016, Paris deputy mayor Jean-François Martins told The Local they should take heart and courage from how Parisians had gotten back to normal after November 2015.

“They are back in the cafes and on the terraces. They have gotten their confidence back and that's what we want to share with those who come,” he said.

It’s obviously down to the individual what they are comfortable with doing, but if you really want to show solidarity with France, don’t put a picture of the Eiffel Tower on your Facebook page or tweet out a drawing of a tear drop in the colours of the French flag. Just come.

Once you get here you'll see that life goes on pretty much the same as it always has done.