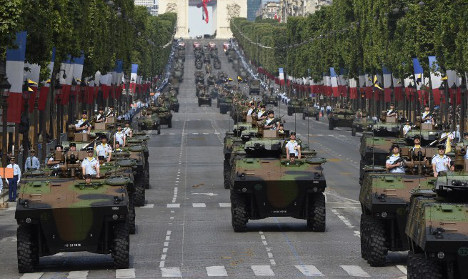 France will supply weapons to Iraq to support its fight against the Islamic State group, President Francois Hollande said on Friday, but ruled out any troop deployment in the country.

“This morning at the defence council, I took the decision as part of the anti-Daesh coalition to make weapons available to Iraqi forces,” Hollande said, using another name for IS.

“They will be there next month,” he said following the meeting with a handful of ministers and the heads of the security forces.

An aide to the president said the weaponry would include artillery batteries and that France would also send military advisors to train Iraqi forces in using them.

Hollande said he would also be sending the Charles de Gaulle aircraft carrier to the region “at the end of September”.

The carrier “will allow us to intensify strikes against terrorist groups in Syria and Iraq using our Rafale jets,” he said.

Hollande insisted that the move did not change the nature of France's military involvement in the region.

“We support our allies in Iraq and Syria but we are not deploying ground troops,” he stressed.

“We have advice to give and training to carry out, but it is not our soldiers fighting on the ground in Syria and Iraq.”