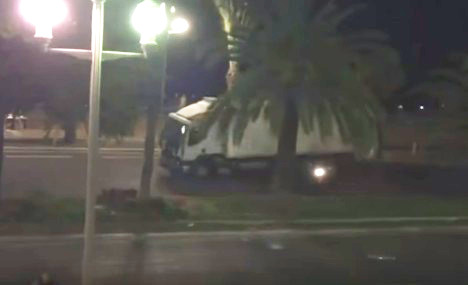 The scooter hero pulls along side the truck on the Promenade des Anglais. Photo: AFP

The man, named only as Franck, was caught in a video chasing after truck driver Mohamed Lahouaiej-Bouhlel as he mowed down revellers on Nice's Promenade des Anglais on July 14th.

He was one of two passers-by who tried to stop the rampage that left 84 dead.

In his first interview since the massacre Franck told Nice Matin newspaper that he was ready to die in order to stop the carnage.

“We heard the cries and my wife said to me ‘stop something isn’t right’. The truck overtook me on the pavement,” said Franck.

“In my mind I had images of bodies flying everywhere. I immediately understood what was happening,” said the man who works at Nice airport.

Franck, who had gone down to the promenade with his wife to enjoy an ice cream, did not hesitate to act, fearful in the knowledge that his son was nearby in Place Massena.

He left his wife and sped off on his scooter.

“To catch up with the truck I had to slalom between the people, both the living and the dead. I was determined to go to the end, to do whatever it takes. I wanted to stop him at any price,” he said.

“When I got level with the cabin, I asked myself a question ‘what are you going to do with your little scooter?’ So I just threw it against the truck.”

His attempts were broadcast on news channels across the world.

Franck then continued to run after the truck until he got level with the cabin again. He climbed up the steps to the cabin and began to hit the driver.

“I hit and hit and hit him again with all my strength. I had to use my left hand even though I am right handed,” he said.

“I hit him in the face but he said nothing, he did not flinch. He had his gun in his hand and pointed it in my face. He pulled the trigger but it did not work.”

In the end he was hit on the head by the butt of the gun and fell from the truck to the road below.

Reports on the night of the massacre suggested the terrorist had an accomplice who was seen jumping from the truck, but it may well be that witnesses had seen the hero being beaten back and falling from the vehicle.

Franck was questioned by police, “who naturally thought I was a terrorist” before being let go.

As the days passed the mystery of the fate of the man who became known as the “scooter hero” deepened with many presuming he had been killed in the chaos.

Thankfully he was one of the lucky ones who survived, although for his courageous efforts he did suffer a broken rib, bruises and a “small depression of his rib cage”.

The other hero of the night was a 31-year-old French crane driver called Alexander who also tried to halt the driver by climbing into his cabin.

He was also forced away when Lahouaiej Bouhlel pointed his gun in his face.