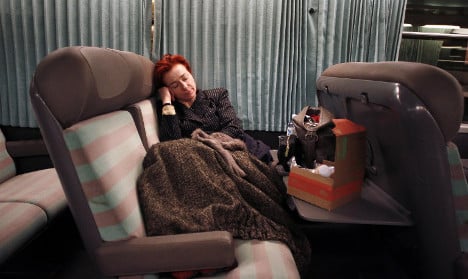 Photo: AFP
You better travel in a couchette while you still can.
France's department of transport said in a statement on Thursday that some of these lines will soon be cut for good.
“The government confirms its decision not to fund the operation of these lines, but remains attentive to any takeover bid. Without such a proposal and without third-party financing, SNCF Mobilités will have to cut services October 1st 2016.”
Travellers can say goodbye to the line between Paris and Savoie, where it stops at either Bourg Saint Maurice or Saint Gervais, both near Chamonix. The line between Paris and Albi in the south west near Spain will also be cut, as will the line between Strasbourg and Nice, and Luxembourg and Portbou, which is just across the French border in the north east of Spain. The map above shows all of France's night train lines. Click the image for a larger version.
The line connecting Paris to Irun in Spain will continue until at least July next year, and the Paris to Nice line will keep running until October 2017.
The line from Paris to Briançon (in the south east of France) will be kept, as will the line between Paris and Latour-de-Carol, which stands on the Spanish border not far from Andorra.
The trains have suffered from a “continually deteriorating quality” and attracted fewer passengers in recent years, said Department of Transport report from May 2015.
Plans to cut the night trains in France resulted in an outcry from fans of the service, with around 3,500 people signing a petition to “Save the French Sleeper Trains”.
The petition came with several suggestions for how the SNCF could cut costs and potentially bring in more overnight passengers, including the creation of a “through-fare” to combine with Eurostar passengers from the UK, targeting ski tour operators, and cutting the service from daily to weekly.
(Below is a video from the petition organizers promoting the value of the trains).