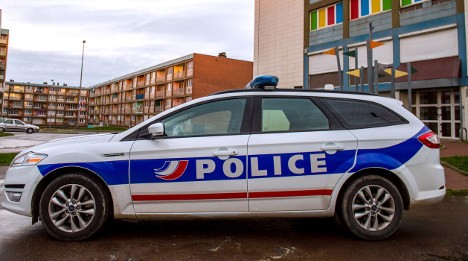 Photo: AFP
The unrest began on Tuesday night after it emerged that Adama, 24, whose surname was not given, had died shortly after being arrested in the town of Beaumont-sur-Oise.
He was taken into custody after interfering in the arrest of his brother in a case of extortion, said a source close to the investigation.
Local prosecutor Yves Jannier said Adama “fainted during the ride” to the police station, and paramedics were called immediately but were unable to revive him.
On Tuesday night five members of the paramilitary police were injured in clashes, and nine cars set on fire, while several public buildings were damaged. One person was arrested.

The unrest continued on Wednesday night in a series of villages situated near each other some 30 kilometres north of Paris, where 15 cars were set ablaze and protesters tried to set a mayor's office and a preschool on fire.
Calm was restored at around 4.30am, after 180 police officers managed to control the crowd of around 200, reported Le Figaro newspaper. Beaumont-sur-Oise. Photo: AFP
“Eight people were arrested. Some for throwing incendiary devices at security forces, others for trying to set a public building on fire,” said local government official Jean-Simon Merandat.
Youths in the suburb say they are convinced that police are responsible for Adama's death.
“He was healthy, a tall, sporty, stocky guy,” said Sofiane, 30.
“We know it is going to be covered up. We know if things don't burn nothing will come of it, that is how we feel,” said Ornel, 24

The video below shows police using tear gas to disperse a crowd in Beaumont-sur-Oise on Wednesday afternoon.
The prosecutor said an autopsy would be carried out to get to the bottom of the young man's death.
The violence comes as security forces are stretched to their limit, after months on high alert for terrorist attacks, and violent anti-government protests in which they have become a target of hatred.
In 2005, when two teenagers were electrocuted to death after hiding in an electricity substation while being chased by police, weeks of massive riots erupted in France's suburbs.
The violence was seen as an urban revolt against the system from France's “ghettoes” with their grim high rise buildings, high levels of poverty and unemployment and populations of first and second generation immigrants who feel marginalised by society.
Url copied to clipboard!