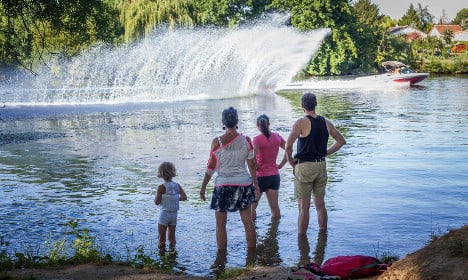 A family stands with their feet in the river Charente in Angouleme, western France. Photo: AFP
It was nice while it lasted, wasn't it?
After a sweltering heatwave over the past two days, French weather agency Météo France has put 19 départements on orange alert for storms – all in central and eastern France (see map below).
The orange alert is the second highest on the agency's four-tiered warning system and urges the public to be vigilant.
Two of the départements, Alier and Puy-de-Dome, are also on alert for the heatwave. Indeed, any hope of clear skies look set to be dashed for most of France on Wednesday, with the storm alerts spreading eastwards throughout the day and into the night (see maps below). Météo France's weather warnings for the storm are scheduled to be in place until the early hours of Thursday morning.
The alerts come after a stifling heatwave blanketed much of France on Tuesday.
Mont-de-Marsan in the Landes département of southwestern France was hit the hardest, with the mercury reaching 40.3C (in the shade).
This is more than 10C warmer than usual temperatures in the area at this time of year, which typically are between 28C and 29C.
The temperature wasn't far off the local record for July, which was 41.2C in 1947.
Niort in western France saw the hottest July day since records began in 1959.
Perros-Guirec in western France's Brittany saw 36.2C, the hottest day since August 1961.
A total of 12 départements were on alert for the heatwave, all in central and western France, and the French were quick to get out and enjoy it.
IN PICTURES: France swelters through heatwave