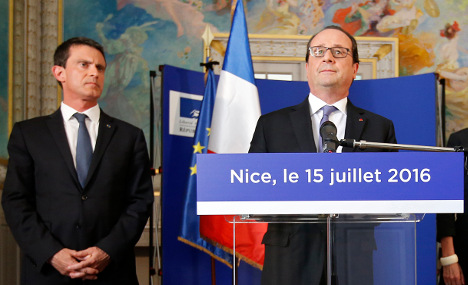 There was a familiar reaction among French politicians after the Nice truck rampage – the third major terrorist attack in France in just 18 months.

President François Hollande vowed to “strike back”, the Prime Minister Manuel Valls vowed that France “would win this war”, while leader of the opposition and possible future president Nicolas Sarkozy said it was “all out war, it’s either them or us”.

National Front leader Marine Le Pen again talked of the need to step up the war on Islamic extremism while another leading politician wanted a war on political Islam.

The war rhetoric was matched with actions. The state of emergency was extended again and the government called on all able-bodied Frenchmen and women to join the reserves which Hollande was said would act as a “National Guard”.

The latest moves follow similar reactions to the attacks in 2015 which prompted the government to send out 10,000 soldiers to patrol the streets and launch bombing raids on Isis targets in Syria and Iraq. Putting France on an apparent war footing might be understandable to many, given the 234 victims of terrorism in 18 months and the heightened threat level which, according to PM Valls, we in France “must learn to live with”.

But French sociologist and expert on Islam Professor Raphaël Liogier, a leading critic of the government response,  says the measures and rhetoric are a catastrophic mistake and simply play into the hands of those seeking to sow terror and divide France, namely Isis.

Author of the book “War of Civilisations Will Not Take Place“, Liogier has been accused by some of being anti-patriotic for his stance. He believes by constantly talking or war and of Islam, France is “doing the best marketing for Isis free of charge”.

'Theatre of war helps them justify their acts'

“France has created a situation that has made it easier for the terror group to convince individuals to attack France. It has created what I call a ‘theatre of war’ that allows them to think that as a ‘soldier of Isis’ their actions will have an impact in France,” he told The Local.

“This theatre of war in France gives a justification to these people who may be psychologically weak, or career criminals or gang members. These individuals are the most dangerous and they don’t need any help from Isis.”

Olivier Roy, another leading voice on Islam agrees. Roy has spoken of the “Islamisation of radicalism” to explain why Isis attracts so many young followers.

“Talk of war only reinforces the discourse of Isis because it presents them as the great global threat. It's a vicious circle,” Roy told Atlantico news site.

Others are also losing faith in the government. A new poll this week revealed that only 33 percent of the French public have confidence in their government to successfully fight terrorism, compared to 50 percent in November last year. Liogier argues that while Isis may be losing territory in the Middle East “it still has the power of propaganda and France is the perfect place to spread their message” to the young men, whom Liogier calls the “new ninjas of Islam”.

These ninjas “dream of becoming anti-heros by brandishing the words 'Allahu Akbar' as their war slogan”, but have nothing to do with Islam or even radical Islam, which Liogier says is an entirely different phenomenon.

While Islamists may be against western society, for the most part they do not promote terrorism, he says.

For that reason the sociologist believes all talk of radicalization and extremist Islam is a red herring.

“These individuals, like Nice attacker Mohamed Lahouaiej-Bouhlel, are often professional criminals. They are obsessed by their image. They are narcissistic. They are just like criminals who need to commit a crime to feel good. All the attackers since January 2015 have had this profile,” he said.

“As long as they shout Allahu Akbar then Isis will claim them. We need to stop the politicians from saying we are at war with Islamism or at war with a religion.”

No country in Europe is as obsessed with Islam as France

But French politicians have long been obsessed by Islamists and indeed Islam, another factor that has made France a fertile breeding ground for the propaganda of Isis.

Every week in France there appears to be a new row or complaint about Islam whether it be outrage that fashion chains are catering to the Muslim market, uproar that Arabic and not French is spoken in some mosques, disgust that students in Paris held a hijab day, disbelief that Muslim pupils are allowed a replacement school dinner when pork is on the menu or the French PM saying Muslim headscarves should now be banned in universities.

“France is the only country in Europe where everyone constantly talks about Islam,” Liogier said.

“Whether it’s the debate about the Muslim veil or halal food everything about Islam becomes a big public scandal.

“France is completely falling to the trap set by Isis and it’s really worrying to see that happening.

After France’s minister for women’s rights compared women who wear the Muslim headscarf and veil to “negroes who supported slavery” Zekri said: “It was as if she set out to help the recruiters of Isis”.

“One moment they say they are not against Islam, then the next they say the Muslim veil is a problem,” said Liogier, who said the country’s 2004 and 2010 bans on Muslim veils were “ideological weapons for Isis to portray France as a real enemy”.

He argues the Socialist government has bowed to pressure to adopt the policies of the right and far right in response to the terror attacks, including a botched plan to strip convicted terrorists of their French nationality.

“With the prime minister and president talking constantly of war and danger he is opting for policies favoured by Marine Le Pen. The more security we have the more to the right we go. To avoid plunging off the cliff, Liogier says Hollands and Valls must accept that their response has been wrong and open up a new debate to find another way to act that doesn’t involve talking of war, of Islam, and asking soldiers to patrol the streets.

“After each attack there is more security. When are they going to realise they have failed? It’s time for them to stop and really analyse what they are doing.

“Stop talking about war. What is happening is something else, perhaps even more dangerous. The enemy is not in front of us, the enemy is ourselves.”

“We need a national debate, beyond the politicians where we can explain that we live in a plural society or multi-identities,” he told La Provence newspaper.

If France does not respond in the right way then Isis and Marine Le Pen will be the big winners, Liogier argues, and that will not spell good news for France.

“We need a national debate, beyond the politicians where we can explain that we line in a plural society of multi-identities,” he said.