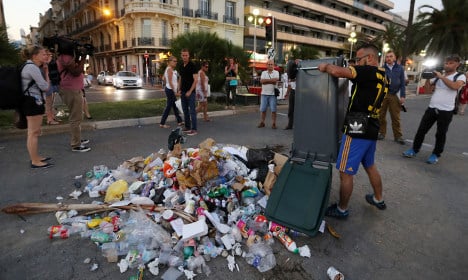 In the midst of the flowers and candles on Nice's Promenade des Anglais, a pile of stones and rubbish has piled up on the spot where the truck attacker's rampage ended.

Passers-by stop to spit on the pile of garbage, adding to it with their cigarette butts and plastic bottles.

Someone has scrawled “coward!” at the spot near where Mohamed Lahouaiej Bouhlel was shot dead by police in his truck after careering through a crowd, killing 84 people on Thursday night. The pile lies only a few metres from the makeshift memorial that has cropped up on the promenade, a sea of flowers, candles, teddy bears and loving messages. Among the dead, 10 were children, and the massacre of a crowd of young and old has shaken France to its core for the third time in 18 months.

Angry residents left insulting messages at the site of Bouhlel's death, including an image of a middle finger with the words “Fuck Daesh” scrawled across it, using the Arabic name for the Islamic State group. READ ALSO: What do we know about the Nice attacker