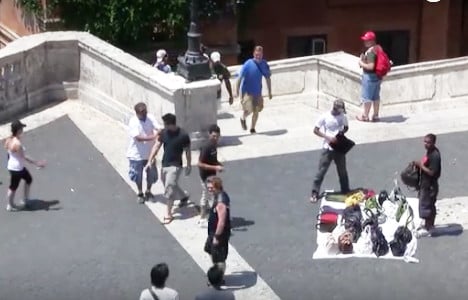 Here are five street scams everyone should know about in Paris. Photo: Screengrab/YouTube

Paris is not considered a dangerous city for tourists, but that doesn't mean there's no crooks out there hoping to get their hands on your money.

One gang of pickpockets at the Eiffel Tower managed to pull in €4,000 each per day before getting arrested.

Elsewhere, a committed core of con artists make their living preying on the waves of visitors who pass through the City of Light every year.

Here are five scams that every visitor should be aware of…and try to avoid:

This is a legendary scam in the City of Light and it goes like this.

A young woman appears before you holding what looks like a gold ring. She says she just found it on the ground in front of you and offers, because she is so nice, to let you have the valuable piece of jewellery.

All she asks is €20 or so for her generosity. But, of course, the ring is not really gold and giving any money for it would make you the victim of a rip-off. Just ignore the trickster and you’ll be fine.

One tourist thwarted the scam and caught it on video:

“Friendship” bracelets or the string scam

Be careful as you walk up the stairs of Sacré Coeur, you might end up losing some money – or a finger.

A herd of bracelet makers are there waiting for you. And they’ll catch you just as you climb up to the famous Basilica by starting a conversation and then tying a bit of string to your finger so they can braid a bracelet for you.

Once it’s done though there will be no mention of friendship, unless of course you pay the nice man who has just crafted the bracelet for you. Best thing to do is ignore them and keep walking.

Here's one visitor's video of the scam in progress:

Before becoming one of the oldest scams practiced in the capital, “Bonneteau” was better known as a magic trick.

Today you’ll see its practitioners with a table fashioned from a cardboard box or ironing board. And it may involve three cups and pea, three playing cards or three black disks, but the goal is always simple.

Don’t lose sight of your card, ball or white-marked disk as the dealer scrambles them. If you’ve been paying attention, it should be a cinch, right? Of course in order to play, you have to put down a bit of cash.

But it’s a scam, through sleight or hand and or distraction the dealer will make sure you always lose. It’s essentially a magic trick.

And as for that person in the crowd who keeps winning — or losing — he or she is in on the scam. The person is called a shill and is there to incite the “mark” to lay down his hard-earned money.

See the scam in action here on the streets of Paris:

This scam could be over and done before you've even realized what happened.

You’re on a busy street in Paris trying to pull some cash out of a bank machine, but you're in such a hurry you don’t bother looking around before you do it.

Suddenly, after inserting your card and keying in your pin code, a group of kids appears around you. One or two of them direct your attention away from the machine and in that instant an accomplice taps the button for the maximum withdrawal – probably around €300.

Then an accomplice will distract you again while another one of the scammers grabs your cash and runs off.

Accordingly, be careful where you take money out. Go inside a bank if you can. But if you’re unlucky enough to become a target, cancel the transaction as soon as the thieves move in and put your hand over the money slot, to grab anything that comes out.

You will sometimes see Doctors Without Borders or Greenpeace fundraisers working the streets of Paris to genuinely raise money, but frequently you’ll run into crews of young people with clip boards and a petition in support of deaf or mute children or a myriad of other causes.

They are scammers and relatively easy to spot too. Unlike the legitimate operators they’ll have no charity ID badge, clothing bearing the charity logo or any identifying marks.

Nope they’ll just shove the paper in front of you, which you might just think is a petition of some sorts. If you decide to sign they’re going to insistently and aggressively ask for money. Best thing to do is clearly say no and keep moving.

This video shows some of the alleged phony fundraisers at work (the clip alleges they are Roma, but that cannot be verified):

SEE ALSO: How to avoid getting robbed on the Paris Metro An original version of this article appeared in 2014.