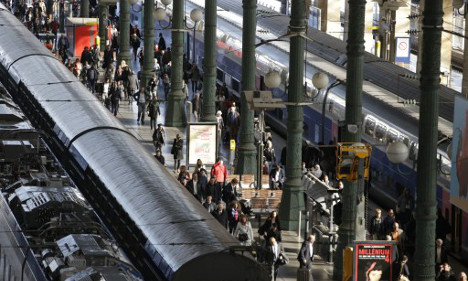 Eurostar, Thalys and RER B and D services from Gare du Nord were all suspended until further notice due after a transformer caught fire to the north of Paris

Some trains to Gare du Nord were evacuated with passengers having to walk along the tracks on foot.

“We were evacuated from our trains,” one passenger told The Local. “Four kilometers on foot to get to Gare du Nord — for the moment no train is leaving. Huge mess.

“The train evacuations were a huge confusion. My train was sitting in the middle of the tracks in the sun for ninety minutes.”

Rail passengers were told to change their travel plans after the blaze to the north of Paris forced authorities to halt all rail traffic.

The station is a main commuter hub notably serving London and Brussels, as well as Germany and the Netherlands.

“We ask that mainline — that is TGV and international — passengers delay their travel,” a spokeswoman told AFP, adding the electricity to the tracks had been cut as a precaution after the fire started.

The Gare du Nord train station is located in the 10th arrondissement of northeastern Paris.

The spokeswoman added a “malicious act” was the suspected cause of the fire near rail equipment just north of Paris, indicating several people had been seen trying to steal electric cables.

A fire brigade spokesman said the fire had been extinguished but that the transformer was damaged beyond use.

On its official Twitter account, the SNCF instructed passengers to delay all train journeys to or from Gare du Nord, adding that lines B and D of the RER are halted as well.

Photos on social media show crowds of stranded passengers waiting on platforms and even walking along the tracks — in 35 degree Celsius heat.

The SNCF wrote on Twitter that traffic will be rescheduled after the required security checks.

At about 9:00pm France time the Eurostar tweeted that six trains between Paris and London are to be cancelled.

The London to Paris #ES9050 and #ES9054 will be cancelled. Details on exchanging/cancelling tickets will follow.